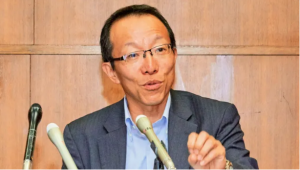 Tomoyuki Fukumoto is one of the Bank of Japan’s leading China hands.

When Bank of Japan Gov. Haruhiko Kuroda was asked by a lawmaker this week about the economic impact of the coronavirus outbreak sweeping through China, his reply acknowledged the increased importance of the economic superpower across the East China Sea.

Compared with the severe acute respiratory syndrome, or SARS, outbreak of 2002 and 2003, “China’s economic presence has grown much larger, and we need to be conscious of the possibility that the impact will be greater,” he said.

China’s share of global gross domestic product has swelled from 4% then to 16% now, and the BOJ’s appointment last month of its top China expert to lead the International Department shows that the central bank is keenly aware of the shift in the economic balance.

Leadership of the department, which handles analysis of overseas economic conditions and cooperation with other central banks, had been dominated by officials with experience in Western financial centers such as New York and London.

But the post of director general is now occupied by Tomoyuki Fukumoto, a former chief of the BOJ’s representative office in Beijing.

“It’s an appointment that’s representative of an era when Asia’s influence has strengthened,” a senior bank official said. “It seems like a sign of a focus on China at the top.”

After joining the BOJ in 1989, Fukumoto studied in Hong Kong and served at the Japanese Embassy in China before taking over the bank’s Beijing office in 2012 for a three-year stint.

Fukumoto delivers economic speeches in fluent Chinese. He also produces fine-grained analysis — backed up by what another senior BOJ official called a “staggering” amount of Chinese connections from his time on the ground there — that Kuroda and other top BOJ officials pay heed to.

Beijing’s growing economic importance is hardly a new development. But other China experts from the BOJ who could have filled the role have moved on to new pastures.

Yosuke Tsuyuguchi, tapped as the first head of the Beijing office when it opened in 2003, now teaches at Teikyo University in Tokyo. His successors include Kiyoyuki Seguchi, now at the Canon Institute for Global Studies, and Rikuichi Niikawa, who works at a Chinese arm of NTT Data.

People with experience in the post are “highly sought after even in the private sector,” said an analyst specializing in China’s economy. The central bank has been unable to hold on to these valuable assets.

As head of the International Department, Fukumoto’s judgment and skills will be tested right off the bat.

The coronavirus outbreak has disrupted flows of people, goods and money, with global repercussions. The People’s Bank of China injected 1.2 trillion yuan ($172 billion) into financial markets Monday, but how much of a boost this will provide to an economy suffering from a massive debt overhang remains unclear.

China is also working steadily toward introducing a digital yuan. A recently announced partnership on research into central bank digital currencies, involving the BOJ as well as the European Central Bank, aims to set international standards in an apparent effort to avoid being left behind.

Fukumoto faces the tricky task of accurately reading Chinese authorities’ intentions and predicting how they will act, without falling into the trap of simply favoring Beijing. Expectations are high for the China hand.