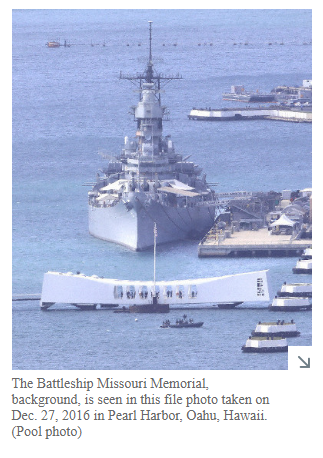 HIROSHIMA — For the first time ever, an atomic bomb exhibition will be held by the Hiroshima and Nagasaki municipal governments this summer in Pearl Harbor, the site of the Imperial Japanese Navy attack on U.S. soil in 1941 that led directly to the start of the Pacific War.

The Battleship Missouri Memorial, a museum ship that rests in the heart of Pearl Harbor in Honolulu, Hawaii, will serve as the venue for the exhibition. Representatives of Japan signed the Instrument of Surrender from the USS Missouri’s deck one month after the U.S. military dropped atomic bombs on the two cities in August 1945.

Hibakusha, or A-bomb survivors, have high hopes that the event, which will be held in a place significant to the Pacific War, will be an opportunity for both Japan and the United States to gain a deeper understanding of each other.

According to the Hiroshima Municipal Government, which announced the news on Feb. 7, the event will be held from early July to Sept. 3 on the museum ship and then continue until early October at the University of Hawaii at Hilo.

Around 20 pieces owned by the Hiroshima Peace Memorial Museum and the Nagasaki Atomic Bomb Museum, including clothes worn at the time by people who were exposed to radiation and pictures drawn by hibakusha, are expected to go on display. Organizers say they will create an occasion for hibakusha to talk about their own experiences.

Both the Hiroshima and the Nagasaki municipal governments have hosted a total of 59 A-bomb exhibitions in 19 countries, mainly in the U.S. and European countries, with the first held in Washington D.C. in July 1995.

During his 2019 visit to Honolulu, a sister city of Hiroshima, mayor Kazumi Matsui was told by the Hiroshima Kenjin Kai (Association of people with roots in Hiroshima Prefecture) in Honolulu that they were willing to cooperate if there were to be an event held for the 75th anniversary of the atomic bombings. Since then, the city has been arranging plans with related bodies in Hawaii.

In the U.S. however, arguments justifying the bombings are deep-seated, and many believe the use of the weapons shortened the war. It is estimated that as of the end of 1945, over 210,000 people had died due to the atomic bombings in Hiroshima and Nagasaki. But assertions that the use of A-bombs was inhumane have been met with criticism that too much emphasis is being placed on the victims’ side of the events.