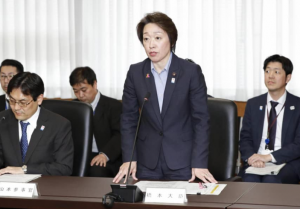 Organizers are growing increasingly concerned that the Tokyo 2020 Olympic and Paralympic Games might be affected by the outbreak of the new coronavirus, which has spread to more than 20 countries.

“We are extremely worried that the spread of the virus could pour cold water on momentum for the games,” Toshiro Muto, chief executive officer of the Tokyo Organising Committee, said during a meeting with the International Paralympic Committee on Wednesday. “I hope that it can be resolved as quickly as possible.”

Preventing the spread of the novel coronavirus during the 2020 Games was the main topic of discussion during a working group Friday at the Diet between Seiko Hashimoto, the Cabinet minister in charge of the games, and members of the organizing committees as well as representatives of local and regional municipalities.

In the previous three meetings of the working group, preventing the spread of rubella and the measles were the main topics of discussion, but this time Cabinet officials said the novel coronavirus was the primary subject of concern.

“What’s most important is that all affiliated groups — the national government, the host city, organizing committees, athletic groups as well as local and regional municipalities — work together to make sure the 2020 Games are carried out in a way that ensures the safety of spectators, staff and athletes,” Hashimoto said at the beginning of the meeting.

The meeting included discussion on how to go about testing athletes, not only from mainland China but other countries as well, to ensure carriers of the virus don’t enter Japan, officials said. Moving forward, organizers will also have to decide whether to continue holding Olympic and Paralympic test events in areas where the virus has been reported.

Speculation has recently circulated among netizens that the Tokyo Olympics may be postponed or canceled due to the outbreak.

“I’d like to make it clear that there have been no talks or plans being considered between organizers and the International Olympic Committee since the World Health Organization declared an emergency,” he told the Diet on Wednesday.

While estimates vary, experts predict the coronavirus will likely last several months. According to a simulation by a medical team at the University of Hong Kong, the number of infections in five major Chinese cities — Beijing, Shanghai, Guangzhou, Shenzhen and Chongqing — will peak between late April and early May.

The Olympics will be held from July 24 to Aug. 9, followed by the Paralympics, which will run from Aug. 25 to Sept. 6. Competitions will be held mostly in Tokyo but several will be hosted in the prefectures of Fukushima, Hokkaido and Shizuoka, among other places.

“This infectious disease is caused by a respiratory virus of a totally new type that human beings have never encountered before,” said Hitoshi Oshitani, professor at Tohoku University who served as a World Health Organization adviser during the SARS crisis in 2003.

“You can’t tell when this (outbreak) will end, but the possibility is low that it will wind down by the Tokyo Olympics,” he was quoted as saying in an interview published Monday in the Nikkei business daily.

As of Friday, 86 cases of the novel coronavirus have been reported across Japan, although that figure includes 61 passengers and crew members from the Diamond Princess cruise ship in Yokohama Bay.

As the novel coronavirus continues to spread, preventing infections has quickly become a vital part of the preparation leading up to the 2020 Games. But this isn’t the first time a viral outbreak has jeopardized the Summer Games.

In 2016, the Zika virus — a mosquito-borne virus proven to cause severe birth defects in newborns — was declared a public health emergency of international concern by the World Health Organization just six months ahead of the Summer Olympics in Rio de Janeiro.

In December 2015, the Zika virus was first linked to a rare birth defect that occurred in more than 1,200 Brazilian newborns that year. First seen in Brazil, the virus was later detected in more than 50 countries. In May 2016 — three months ahead of the opening ceremony — the state of Rio de Janeiro had recorded 26,000 suspected cases.

“The Olympics could not be better engineered to spread disease, because they attract visitors from every country in the world — something that no other mass gathering does, not even the World Cup,” Canadian epidemiologist Amir Attaran wrote in The Lancet in July 2016.

Timing benefitted the 2016 Games, since the opening ceremony was held in early August — wintertime in Brazil — when mosquitoes are less active.

But there are two major differences with the coronavirus and how it might affect the Tokyo Games.

Japan, though it may have the second largest number of reported cases of the novel coronavirus when counting the cruise ship passengers, is not the center of the outbreak. The virus is thought to have originated in Wuhan in China’s Hubei province. In China, more than 30,000 people had been infected and more than 630 killed as of Friday.

The second difference is that the novel coronavirus is transmitted mainly by direct contact with infectious droplets, not by vectors like mosquitoes. This implies an entirely different set of challenges for Tokyo.

Research is still preliminary but experts believe the new coronavirus is most often transmitted when droplets are spread through coughing, sneezing or physical contact. Transmission is thought to be comparatively higher in crowded or enclosed places.

The Japanese government aims to attract a record 40 million tourists to the country in 2020.

It’s entirely possible for Tokyo to host the 2020 Games as long as the government works together with the WHO and other organizations to take the necessary steps to contain the novel coronavirus, said Koji Wada, a professor in public health at the International University of Health and Welfare in the capital.

He went on to explain that people planning to attend the Olympics or Paralympics will need to act responsibly as well. For example, Wada suggested the government ask people not to attend events if they feel ill or have symptoms like coughing or fever.

“In a sense we’re lucky because, if the virus had emerged just a few weeks before the opening ceremony, we might have had to cancel the games,” Wada said. “But we have five months. If we work together — not just the government but everyone — and take the necessary steps to prevent further infection, it’s perfectly possible for Tokyo to go ahead and host the Summer Olympics.”