TOKYO — Takehiko Nakao was playing his last round on a golf course in the Philippines when the Taal Volcano began erupting less than 80km away. Five days later, in mid-January, as ash continued to coat the skies of Manila, Nakao flew home to Tokyo, ending his seven-year tenure as president of the Asian Development Bank.

Perhaps it was a fitting send-off. Nakao leaves the ADB as the US and China gear up for their next competition: the race to fill Asia’s infrastructure financing gap. Meanwhile, the ADB’s market share is shrinking in long-time recipient states, who view Chinese financing as easier to secure than clearing ADB’s high standards for project loans.

Nakao, who was once Japan’s most prominent messenger to financial markets as vice finance minister for international affairs, saw his role at the ADB as a liaison between China and other member countries, including the U.S. The ADB’s future might lie in this middle ground.

“Despite the ‘America First’ rhetoric, the U.S. Treasury’s interest in the ADB is strong because they can use the existing system to reach emerging economies,” Nakao said in an interview with Nikkei Asian Review in Tokyo.

While the U.S. has maintained a hands-off role at the ADB since the organization was founded in 1966, the administrations of Barack Obama and current U.S. President Donald Trump have criticized the bank’s continued provision of non-concessional loans to China. Such loans are meant for low-income developing countries, a category the U.S. insists China should “graduate” from.

The bank under Nakao withstood pressure from the U.S. to cut China’s loans, which in 2019 comprised 10% of the ADB’s operational fund. But Nakao defended the loans as environmental projects that would benefit not only China but also its neighbors.

“ADB loans to China are not concessional or subsidies,” said Nakao. “It’s an interest-based loan supporting mostly climate change projects.” The bank in the past five years approved $300 million each for the preservation of the Yangtze River ecological corridor, and for air pollution control in Tianjin, Hebei, and Beijing. Air pollution from China wafting to South Korea has become a political flashpoint between the two countries.

But aside from the positive externalities of its loans to China, Nakao saw continued lending as a way to influence China’s thinking on its own international development financing, namely the Belt and Road Initiative.

“My position is it’s worth engaging China through lending to have more influence on China’s development and the environmental effects. They want to hear our views because we finance their projects,” Nakao said, adding that the majority of the ADB’s board, which approves loans, have so far agreed with him.

During his tenure, Nakao cooperated closely with his counterparts in the China-led Asian Infrastructure Investment Bank, who he said rely on ADB expertise and want to learn from Japan’s official development assistance model. While it continues to receive ADB loans, China itself is also a major lender to governments who want financing without strings attached in terms of political and economic reforms.

“It’s very natural for the Philippines to accept if China is offering loans, but they should take a sensible approach to financing for development” to ensure debt sustainability, environmental impact and life-cycle cost — and that is where the ADB’s expertise comes in, according to Nakao.

While Chinese loans are directed at energy projects and private sector investments, the ADB can continue to focus on neglected infrastructure, such as Manila’s railways. Nakao touted the Malolos-Clark Railway, a $2.75 trillion project to connect the capital city of the Philippines to Clark, where its alternate airport is located. 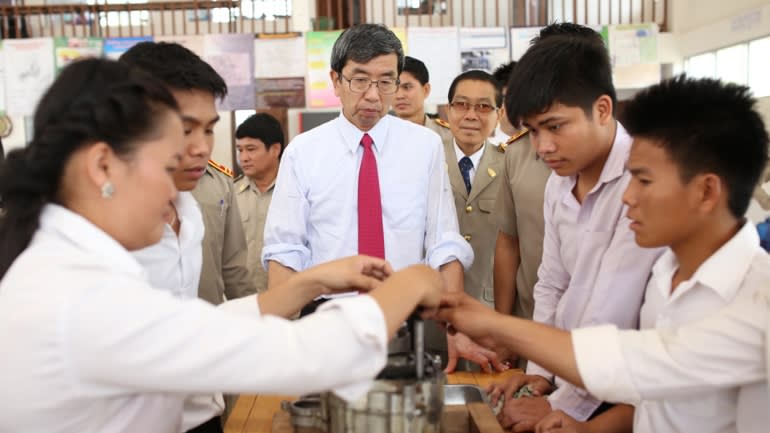 Former ADB President Takehiko Nakao, center, with students at a shipbuilding vocational school in Laos financed by the bank (Photo courtesy of ADB).

Co-financed with the Japan International Cooperation Agency, the railway is the largest ever financing the ADB has approved for a single project. The approval was reportedly fast-tracked to give the Philippines a more favorable interest rate for the loan, before it graduated into middle-income status.

Nakao spoke warmly of Philippine President Rodrigo Duterte and Finance Secretary Carlos Dominguez, saying he admired their ambition to invest in the country’s infrastructure. Before his departure, Nakao was awarded the Order of Sikatuna, the Philippines’ highest civilian honor, by Duterte. Dominguez’s brother, Paul, sits on the ADB’s board of directors.

On the issue of transparency in the ADB’s board appointments, Nakao said, “We don’t have a say in government representation. If there is [a need for] transparency, that’s an issue for the governments and their people.”

As he begins semi-retirement, Nakao said he has cooked dinner for his family nearly every night since he returned to Tokyo. But beyond his domestic sphere, he still worries that geopolitical issues will pose a bigger risk to Asian stability than the gap in development finance. “We’ve had relatively stable conditions since the Vietnam War,” he said, which enabled Asia’s economic development.

Nakao hesitates to declare the 21st century as the Asian century because of persistently low gross domestic product in some countries and a lack of investment in human capital and environmental protection. “Asia didn’t grow because it developed its own ‘Asian consensus,’ but because it followed the model for growth, focusing on market and private sector activities,” he said.

Nakao is in talks to impart his knowledge and experience to university students, possibly as a lecturer on Asian economic history and multilateral institutions.

Japan, which shares veto power in the ADB with the U.S., made significant contributions to the economic development of its neighbors, many of whom are ADB members. The bank, under its new leader Masatsugu Asakawa, will continue to face the question of whether its voting structure should change to give its smaller members a louder voice in deciding loans — or risk losing relevance as China and the U.S. continue to flex their muscles.

Asked if there will ever be a non-Japanese president of the ADB, Nakao said, “It’s up to the member countries. But no one has challenged Japan’s presidency so far.”