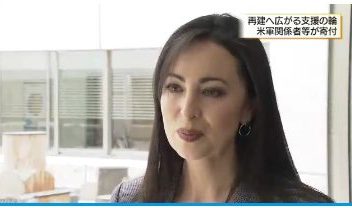 NHK’s Okinawa bureau reported on Feb. 6 that Mari Gregory, the wife of a Marine officer who used to be stationed in Okinawa, presented a donation of 1.17 million yen to Okinawa Governor Tamaki earlier in the day to help restore Shuri Castle after it was destroyed in a fire last October. The donation mainly consisted of contributions from U.S. military service members and their families stationed in Okinawa. According to the network, Gregory, who now lives in the U.S., started an Internet funding campaign right after the castle caught on fire and the circle of support spread to about 200 U.S. military service members and their families who had been stationed in Okinawa. She was quoted as telling the Okinawa governor: “I started this crowdfunding project after my U.S. military friends asked me what they could do to help…. Please accept this donation so that Shuri Castle can be restored as soon as possible.” Ryukyu Shimpo and Okinawa Times carried similar stories on Friday and Saturday, respectively.