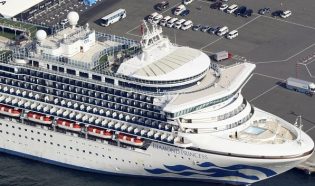 All networks reported that the Ministry of Health, Labor, and Welfare announced this morning that it conducted virus tests on an additional 53 people on the Diamond Princess and found that 29 passengers and 10 crewmembers have been found to be infected with COVID-19. Separately, one quarantine official was also found to be infected with the virus. One of the 39 infected people is a teenager. NTV said that the 39 people include 10 Japanese, 7 Americans, 4 Chinese, 4 Australians, and 4 Filipinos. The ministry has now conducted virus tests on a total of 492 passengers aboard the cruise ship and the number of those confirmed to be infected with the virus is 174.

Health Minister Kato told reporters that the ministry has confirmed that four of the people from the cruise ship diagnosed with COVID-19 are in serious condition. The networks said that among those four patients, two are being treated in the ICU and the other two are on respirators. One Japanese man in his 60s and two Japanese men in their 70s are among the four who are in serious condition. The other one is a foreign national in his 70s.

NHK reported that Kato separately told a Diet committee session this morning that in view of the virus transmission risk associated with transferring passengers from the cruise ship to hospitals, the use of a “hospital ship” is an option and that his ministry will need to swiftly study the possibility of using such a ship in coordination with other relevant government agencies.

The network also said that concerning the possibility of testing all passengers and crewmembers aboard the Diamond Princess for the virus, Prime Minister Abe told a meeting of a GOJ taskforce dealing with COVID-19 this morning that the GOJ is planning to increase the number of tests that can be carried out from about 300 per day to at least 1,000 with the cooperation of municipal and private-sector facilities.