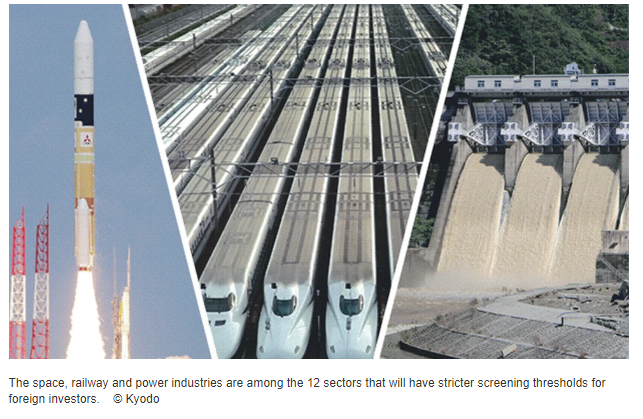 TOKYO — Foreign investors purchasing a 1% or more stake in a Japanese company will be subject to prescreening if the target company is included in 12 specified sectors deemed critical to national security, such as arms, aircraft and space-related industries, Nikkei has learned.

In a bid to prevent foreign influence in critical companies, especially with China in mind, the Japan diet last November revised the Foreign Exchange and Foreign Trade Act to lower the threshold to 1% from the previous 10%.

The exact details of implementing the revised law will be determined by cabinet and ministerial orders, which are currently being worked out.

According to the proposed orders that Nikkei has seen, the 12 sectors also include nuclear power, general-purpose products with potential to be used for military purposes, cybersecurity-related, power, gas, telecoms, water supply, railways and oil industries.

While the aim of the law is to strengthen national security, investors have been wary that the new regulatory framework would add extra paperwork and may result in excessive control on stock trading.

Addressing such concerns, the proposed ministry orders will exempt a wider range of foreign financial institutions and hedge funds from the reporting requirement if they satisfy specified conditions.

Specifically, foreign securities brokerages, banks, insurers and asset managers that have obtained licenses from or registered with overseas authorities will be exempt as long as, for example, no employee is serving as an officer in the target company or they do not make shareholders proposals to divest assets.

Hedge funds, including activist investors, can also be exempt if they are registered with the U.S. Securities and Exchange Commission.

Sovereign wealth funds and public pensions will be exempt from prior application requirements after passing a screening process to determine that they are not national security threats, and signing separate memorandums of understanding with the government.

Foreign investors owned 29.1% of Japanese equities at the end of March 2019, and accounted for 70.9% of the trading volume by value last year, according to data from the Tokyo Stock Exchange and other sources. This demonstrates the centrality of international investments for fueling Japan’s economic growth.

The revision of the law seeks to align Japan’s regulatory framework with the U.S. as well as European countries, which have already tightened foreign ownership measures.

“Assuming that activist investors fill out an applications beforehand, it’s not clear what conditions need to be met to gain approval,” said Kenji Abe at Daiwa Securities.