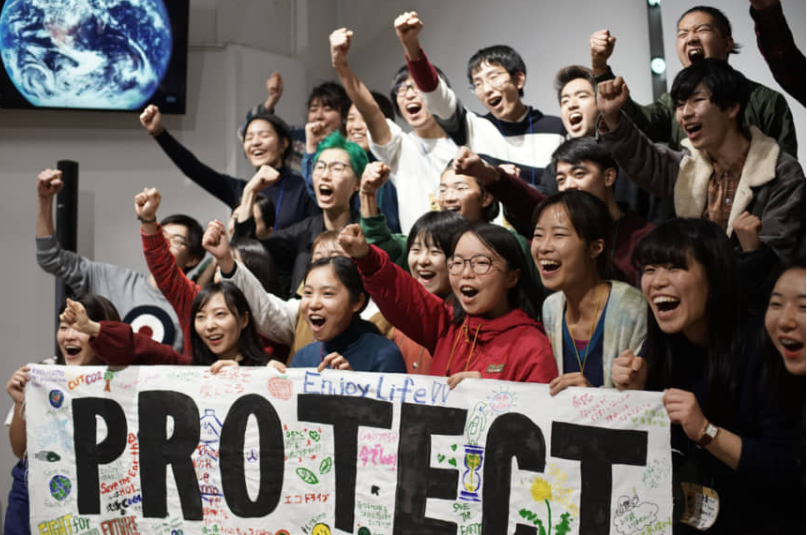 Young Japanese who are members of local chapters of the global environmental group Fridays for Future are seen on the final day of the inaugural Climate Crisis Youth Summit in Shibuya Ward, Tokyo, on Sunday. | RYUSEI TAKAHASHI

Leaders of Japan’s youth climate movement gathered in Tokyo over the weekend to attend the inaugural Climate Crisis Youth Summit.

The three-day event brought together more than 80 young climate activists representing groups from all over the country. They met to coordinate and organize ahead of the Global Climate Strike in April and the United Nations Climate Change Conference, or COP26, which will be held in Glasgow, Scotland, in November.

“Of course we want more people to take part in marches and understand the urgency of the climate crisis,” said Saori Iwano, 16, a member of Fridays For Future Tokyo. “But what’s more important is that everyone questions why climate change isn’t talked about in Japan, and examines the societal mechanisms that are keeping it that way.”

The weekend’s summit marked one year since members of the group — the local branch of a global movement started in August 2018 by now 17-year-old Swedish activist Greta Thunberg — first staged a demonstration in front of the Diet building, in February 2019. Around 10 protestors showed up for the demonstration, and were outnumbered by reporters, organizers recall.

“Nobody was paying attention to us at first,” said Hanae Takahashi, 26, from Friends of the Earth Japan.

Less than a month later, about 200 people attended a march in Shibuya. Roughly 250 took part in a protest in May and, in September, more than 2,800 took to the streets of Tokyo and 5,000 across Japan during the Global Climate Strike. Worldwide, 7.6 million people gathered across 185 countries in what organizers say was one of the largest coordinated protests in history.

“I never expected it to reach this scale,” Takahashi said. “We’re creating a new kind of movement; one Japan has never seen before.”

At COP26, in November, U.N. member nations have been asked to submit a revised plan to achieve net zero carbon emissions by 2050, to prevent global warming of 1.5 degrees Celsius compared to preindustrial levels. Leading up to the conference, environmental groups across Japan share one primary goal: convincing the government to raise its nationally determined contributions, or NDCs, which are at the heart of the 2015 Paris Agreement.

During the three-day summit, organizers held workshops to discuss how best to spread awareness of issues such as plastic waste, fossil fuel consumption and the viability of renewable resources in Japan.

They also coordinated plans for further demonstrations leading up to the Global Climate Strike, which will be held worldwide on April 24. In Tokyo, the march will start in front of the United Nations University in Shibuya Ward, with related marches also being planned in other parts of the country.

Experts, academics and veteran activists were invited to the weekend’s summit to give lectures and take part in workshops. Many of them have been involved with environmental protest for decades, and have pointed out that Japan’s new wave of environmental activism is highly educated and markedly global in its way of thinking.

“These young activists are moving forward at a pace and in a manner people like me can’t understand,” said Seita Emori, deputy director of the Center for Global Environment Research at the National Institute for Environmental Studies, adding that “it would be a waste to imprint adult sensibilities upon this movement.