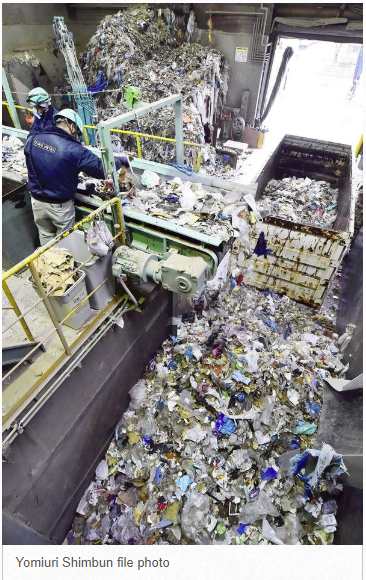 Japanese companies including Japan Airlines (JAL) and Marubeni Corp. plan to begin a project to produce aviation fuel from plastic waste such as packaging materials from construction work sites.

The companies aim to run test flights using the fuel sometime in the first half of the 2020s. Using this kind of alternative fuel is expected to reduce carbon dioxide emissions.

JAL has exchanged memorandums with Marubeni, JXTG Nippon Oil & Energy Corp., and JGC Japan Corp. about promoting the production and sale of the fuel.

In 2018, JAL and Marubeni invested in a U.S. company that produces alternative aviation fuel from waste materials. By utilizing the company’s technologies, the Japanese firms will produce an alternative fuel that can be mixed with jet fuel.

Initially, JAL and its partners will build a system for collecting packaging materials and other such waste products from which fuel will be produced. They will also examine to what extent carbon dioxide emissions can be reduced by using the fuel.

Possibly in the first half of 2020s, the companies will conduct a demonstration experiment and, in the latter half of the decade, build a plant specializing in production of the alternative fuel in Japan so it can be put to practical use.

A current estimate indicates that the quantities of carbon dioxide discharged during the production process for alternative fuels could be about 50% lower than when fossil fuels are produced.

The plan could also contribute to reducing the amount of plastic waste that is currently incinerated or sent to landfill.

The companies assume that hundreds of thousands of tons of waste materials, including plastics, will be used to produce the fuels annually.

Thus it is an urgent task to reduce emissions by utilizing alternative fuels or by other means.

JAL is also collaborating with Aeon Co. and other companies to develop an alternative aviation fuel made from old clothes. Others are studying the development of biofuels made from things like algae. But these methods face hurdles such as high costs.