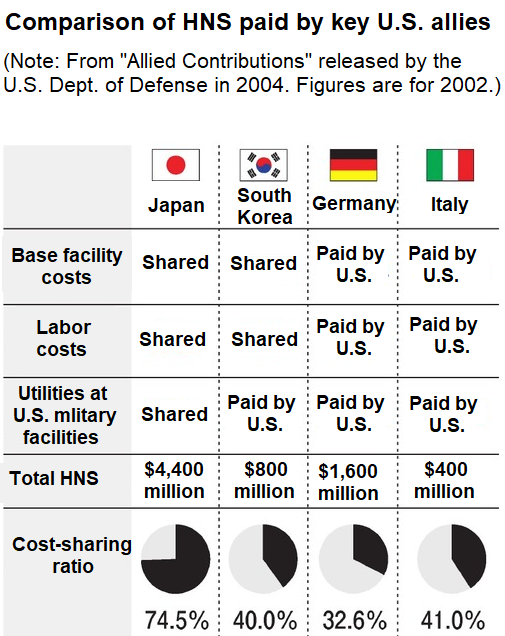 By Koji Sonoda and Yuka Takeshita

“I said to Prime Minister Shinzo Abe, a friend of mine. I said, ‘You have to help us out here. We’re paying a lot of money. You’re a wealthy nation,” related U.S. President Donald Trump. During a meeting with NATO Secretary General Jens Stoltenberg in London last December, the President expressed his dissatisfaction with U.S. allies’ coverage of military expenses and revealed this conversation he had had with Prime Minister Abe.

Past U.S. administrations have also asked Japan to increase its share of the stationing costs, but “have refrained from formally and openly demanding an increase in Japan’s defense spending and host nation support (HNS) out of concern about backlash from the public,” according to a top official at Japan’s Ministry of Foreign Affairs. But Mr. Trump is “completely convinced,” according to a top Ministry of Defense official, of his personal view that the U.S. alone is paying a huge amount in military expenses while its allies take a free ride.

In 1987 when Mr. Trump was gaining notoriety as a real estate tycoon, he bought full-page advertisements in the New York Times and other U.S. papers to air his views on U.S. foreign policy. “There’s nothing wrong with America’s foreign defense policy that a little backbone can’t cure,” the advertisement’s headline declared. “America should stop paying to defend countries that can afford to defend themselves.” After identifying Japan as one such country, the ad continued: “These countries have been using the United States. Make them pay for the protection we extend as allies.”

Former Defense Secretary James Mattis and other top U.S. officials who “prioritize America’s alliances” have disappeared from the administration, and Trump’s hard-line stance on allies has grown visibly stronger.

Japan covers about 74% of the costs of stationing U.S. forces in Japan, according to a report released by the U.S. in 2004. The U.S. government plans to ask for an increase. According to someone affiliated with the American government: “That 74% is an old figure. U.S. military costs have ballooned, and we are now recalculating the figure. The percentage covered by Japan has decreased.” A certain high-ranking official at the U.S. government says, “After we finish the negotiations with South Korea, we will turn to the talks with Japan, using the ROK agreement as a model.” In other words, the U.S. is ready to demand, as it did with South Korea, that Japan pay the fuel costs for U.S. warships, using a framework separate from the traditional HNS categories. The official says, “The purchase of U.S. weapons will also be put on the table for discussion.”

“The costs of stationing the U.S. military in Japan are shared appropriately based on an agreement between the two governments,” comments Yoshihide Suga. In response to a question at the Diet in October, Prime Minister Abe said, seeking to forestall an attack, “Japan covers about 70% of the costs of stationing the USFJ. If the sum were increased several fold, the U.S. would make money from stationing their forces here.” In the negotiations with the United States, Japan plans to play up the fact that the percentage of stationing expenses paid by Japan is much greater than that paid by other allies and the fact that Japan has increased its defense spending since the launch of the second Abe administration.

How will Japan respond, however, if the United States demands it cover the fuel costs for U.S. warships and purchase U.S.-made weapons under a “separate framework” in addition to the current HNS? In its negotiations with the U.S., South Korea is faced with such a demand, and so the Japanese government is frantically collecting information from the South Korean side on the process of their negotiations with the U.S. and the U.S. demands themselves.

Japan and the U.S. have already started haggling over when the negotiations will start. The U.S. side wants to start full-fledged negotiations this summer, while Defense Minister Taro Kono is working to keep the U.S. in check. “The negotiations will start from around the beginning of autumn this year,” he has commented. By putting off the negotiations, he hopes to gauge the outcome of the presidential election, but a conclusion will have to be reached by next March when the current special measures agreement expires. Government sources say, “These will be really tough negotiations.”