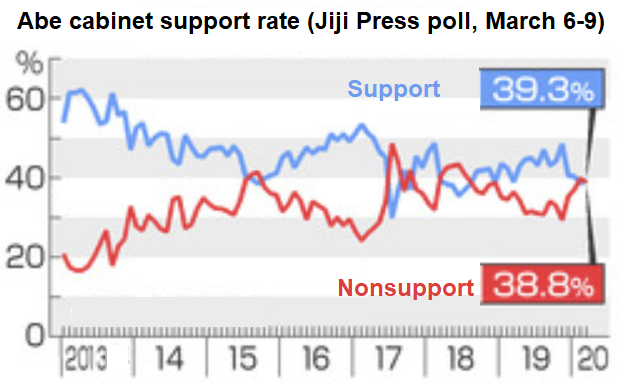 Support for the cabinet inched up 0.7 percentage point from the previous month to 39.3 pct, while the disapproval rate fell 1.0 point to 38.8 pct, according to the survey. The standstill came despite public criticism over the government’s handling of the new coronavirus epidemic.

As many as 78.2 pct of respondents said Abe is not fulfilling his responsibility of giving explanations about a scandal concerning government-funded annual cherry blossom-viewing parties hosted by the prime minister, while 7.2 pct said that he is. On whether the Diet, Japan’s parliament, should continue pursuing the issue, 22.6 pct said it needs to while 59.8 pct answered that it does not.

On reasons for supporting the cabinet, with more than one answer allowed, 22.3 pct said there is no other suitable person for prime minister, 8.1 pct said Abe has leadership skills and 7.0 pct said they trust him.

Komeito, the coalition partner of the LDP, drew support from 3.5 pct, the Japanese Communist Party from 1.6 pct, Nippon Ishin no Kai (Japan Innovation Party) from 1.3 pct.

Support stood at 0.7 pct for Reiwa Shinsengumi, 0.5 pct for the Social Democratic Party, 0.4 pct for the Democratic Party for the People and 0.1 pct for NHK kara Kokumin wo Mamoru To (the party to protect the people from NHK, or Japan Broadcasting Corp.) while the share of people who do not support any political party stood at 62.4 pct.

The face-to-face interview survey, conducted for four days through Monday, covered 1,913 people aged 18 or over in the nation. Valid responses were given by 63.5 pct. The March survey excluded Hokkaido, where the coronavirus outbreak is serious.