TOKYO — Yuyado Hananoyu, a traditional hot spring ryokan in Shizuoka south of Tokyo, will have served its last customers by the end of this month, no thanks to the coronavirus outbreak. Like many small and mid-sized businesses in Japan, its income has been devastated by travel restrictions on Chinese tourists over the last two months.

“I don’t know when this virus will be over and until when we have to endure this situation,” said Yuyado Hananoyu’s 54-year-old owner Noriko Matsushima. “I am devastated and there is no fight left in me.”

Matsushima said the ryokan started receiving cancellations from Jan. 27 when China banned outbound group travel. In a very short time, all bookings until April from China were canceled.

Chinese tourists account for 99% of her customers, she said. They used to arrive at the ryokan by bus and filled all 19 rooms every night. “When we started operating this ryokan, we decided to focus on Chinese tourists because we thought it would be a more stable business to welcome them than targeting Japanese customers,” said Matsushima.

She is not the only one struggling. According to Teikoku Databank, the coronavirus outbreak has triggered the bankruptcy of eight companies in Japan by March.

Luminous Cruising, an operator of cruise ships based in Kobe, filed for bankruptcy on March 2 as customers canceled in droves particularly after the Princess Diamond, docked in Yokohama, made headlines globally as a virus breeding ground.

Apart from Luminous Cruising, a wide range of business operators across Japan — from hoteliers to a cram school to a Kimono fabric shop — faced difficulties. An analyst said that the current environment proved the last straw for companies that were already wobbly.

Shigenobu Abe, an analyst at Teikoku Databank, said: “Before the coronavirus outbreak, they already had problems with their financial conditions. Coronavirus became the final blow and that’s why it did not take long before they went into bankruptcy.”

During the SARS outbreak in 2003, 50 travel agencies collapsed. On Tuesday, Hiroshima-based travel agency Aitravel filed for bankruptcy and Abe said that coronavirus will claim many more businesses than SARS.

This is in large part due to government measures to contain the outbreak in Japan, including closing schools and canceling events, causing a ripple effect on even more businesses as consumers stayed home.

According to a survey conducted mid-February by the Japan Chamber of Commerce and Industry, over 60% of small and medium-sized companies said they had been affected by coronavirus.

“We suppose the impact has been further spreading,” said JCCI in a report released last week. As of March 9, the government has received over 30,000 inquiries from small- and medium-sized enterprises in Japan related to current operating environment. Of those, 90% were about cash flow problems.

Tokyo is extending a helping hand. On top of its first financial support package worth 500 billion yen ($4.8 billion) which provides low-interest loans for SMEs, it has also prepared a second round worth 1 trillion yen and extended it to self-employed workers affected by the outbreak.

But some are unsure if such financial aid would help. Abe at Teikoku Databank said many business owners are not even in the position to think about borrowing money if they cannot see a brighter future. “Many of them are afraid of being unable to pay it back and borrowing money now might result in cutting their own throat after all,” said Abe.

Ryokan owner Matsushima agreed. “Even if I can borrow money with low interest, I am afraid I cannot pay the debt back because I cannot tell when the situation will get better,” said Matsushima.

Some experts said the measures do not go far enough though. “The government should tackle the issue by introducing measures to stimulate domestic demand,” said Hiroaki Irie, associate professor at Kindai University.

After the sales tax hike from 8% to 10% in October, Japan’s domestic consumption has been shrinking and economic growth in the October-December period fell 7.1%.

“The coronavirus came amid an already weak economy,” said Irie. “The current package is not enough and the government should respond more quickly and take measures in rapid succession.”

Irie pointed to the U.S. offer of a $50 billion package and to cut payroll tax as an example of more drastic measures. 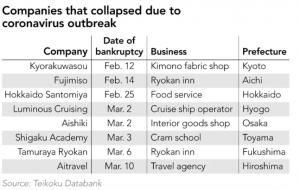