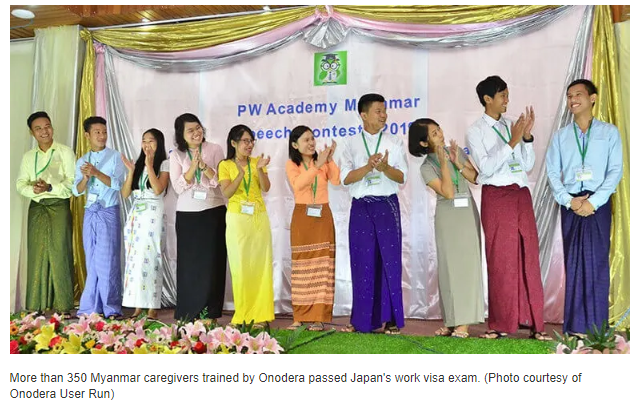 TOKYO — Only a handful of foreign nationals have qualified for visas Japan rolled out last year for semiskilled workers, but one staffing agency here is responsible for training nearly 40% of caregivers who made the grade.

Onodera User Run said Wednesday that 613 applicants it trained passed the standardized test for obtaining the worker visa for the nursing care industry. Roughly 1,700 people combined had qualified to be caregivers in Japan as of late January.

The Tokyo-based company runs 23 nursing care training centers in Myanmar, the Philippines Vietnam and Cambodia. The plan is to dispatch qualifying students to care facilities in Japan. With hiring underway, some workers will travel to Japan as soon as May.

In Myanmar, 353 students passed the caregiver visa exam, which began being administered there this February. Another 260 people passed in the Philippines.

Japan rolled out the “specified skilled worker” permits last April for 14 labor-short sectors, such as nursing care and restaurants. But along with passing skills tests, applicants must demonstrate proficiency in speaking Japanese, which has presented a barrier.

The program has fallen far short of its first-year goal of 40,000 semiskilled workers.