Japan’s economy is contracting, 90% of economists say in survey 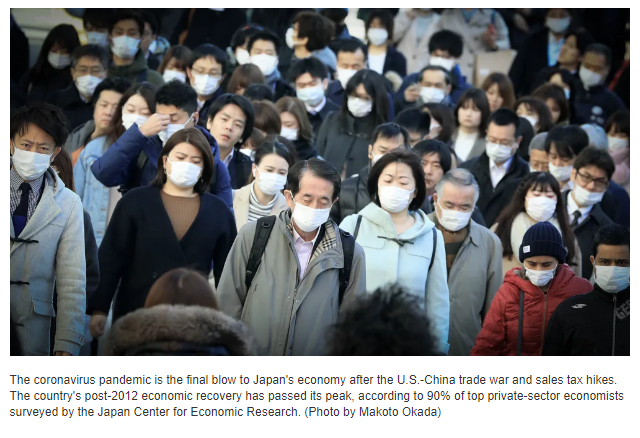 TOKYO — Japan’s post-2012 economic recovery has passed its peak, according to 90% of top private-sector economists surveyed by the Japan Center for Economic Research.

The domestic economy, which entered a long recovery phase in December 2012, began hitting turbulence last year: the U.S.-China trade war and the consumption tax hike in October, to 10% from 8%. The survey suggests economists now see the coronavirus as the final blow to the long recovery.

The JCER analyzed economic forecasts by 34 think tanks and other private concerns and received replies to its survey between March 3 and March 10. The closure of schools across Japan began at that time, as requested by the government, while economic activity was rapidly shrinking as events were canceled, companies asked employees to telecommute and many Japanese began staying home.

Of the 33 economists who responded to the survey, 29 said the economy was already contracting, up from 13 in the previous survey, in February.

The Japanese economy hit a trough in November 2012, according to the most recent official reading. Its recovery phase began the following month.

Seventeen of the 29 economists said the recovery peaked in October 2018. In the second half of 2018 it began feeling the effects of a global economic slowdown, the result of the U.S.-China trade war. The country’s exports and production then began to show the strains of stagnation.

The 73-month “Izanami boom,” from February 2002 till the same month of 2008, had been postwar Japan’s longest economic recovery phase. In January 2019, Toshimitsu Motegi, then-minister for economic and fiscal policy, said the new “boom” had likely surpassed the record.

But if the trough came in October 2018, the longest postwar economic expansion, as claimed by the government, was an illusion.

Some of the economists expressed the view that the economy peaked this past September, the month before the consumption tax rate climbed 2 percentage points. “The economy fell into a phase of contraction because coronavirus infections dealt an additional blow to an economy already weakened by the consumption tax hike,” said Shinichiro Kobayashi of Mitsubishi UFJ Research and Consulting.

As for the economy going back on the mend, that depends on when the pandemic settles and whether the Tokyo Olympics take place this summer. “The economy will bottom out soon after economic activity returns to a normal mode,” Taro Saito of NLI Research Institute said, “as there are no supply restrictions, such as damage to manufacturing equipment or electricity shortages, like after the Great East Japan Earthquake” that leveled so much of the country in 2011.

The dates of economic peaks and troughs are determined by a study panel of economists and other Cabinet Office experts. The diffusion index, which assesses the state of the economy and serves as a key reference, showed “deterioration” as the basic assessment for six consecutive months through January. This points to the high possibility of a recession, a widely accepted definition for which is two straight quarters of contraction. The panel also analyzes other factors, including how component indicators weakened.

Now with the pandemic taking a toll, the panel is highly likely to conclude that the criteria for judging a recession have been met.

Real-term gross domestic product, also a key reference point, contracted 2.89% in the January-March period from the previous quarter, according to the average of forecasts by 34 private-sector economists. Chances are high that the economy will log sharp negative growth for a second consecutive quarter after having declined 7.1% from October through December.

In the February survey, Japan’s GDP was forecast to expand 0.33% in the first quarter of this year. But the spread of the coronavirus turned economists pessimistic.

With regard to the Bank of Japan’s Tankan, another important reference, the latest business sentiment survey is widely expected to show a rapid deterioration when it is released on April 1.