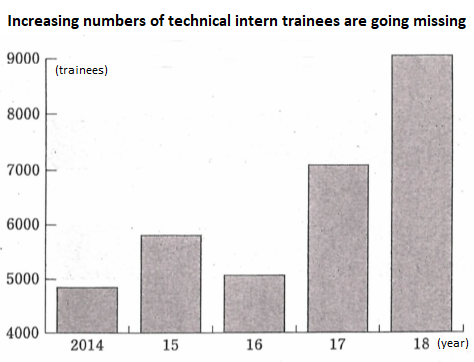 Nominally, the aim of the Technical Intern Training Program is to “transfer skills and technologies to developing regions and other areas.” There are many cases of workplace violence and illegal actions, like nonpayment of wages. For this reason, there is a steady stream of trainees who cannot tolerate their situations and flee.

The number of trainees rose further, reaching 384,000 as of the end of October 2019. Although the number of trainees who went missing in 2019 has not been released yet, Justice Minister Masako Mori said at a press conference last November that the number was “increasing” in the first half of 2019. Despite the fact that the Justice Ministry has implemented “measures to rectify” the situation, the efforts have not resulted in a reduction in the actual number.

The U.S. State Department has repeatedly criticized the Technical Intern Training Program (TITP) as “forced labor” in its Trafficking in Persons Report. In the most recent report issued in June 2019, it criticized Japan, saying: “Despite the fact that there is substantial evidence of human trafficking, the Japanese government has not admitted there is forced labor in the TITP.”