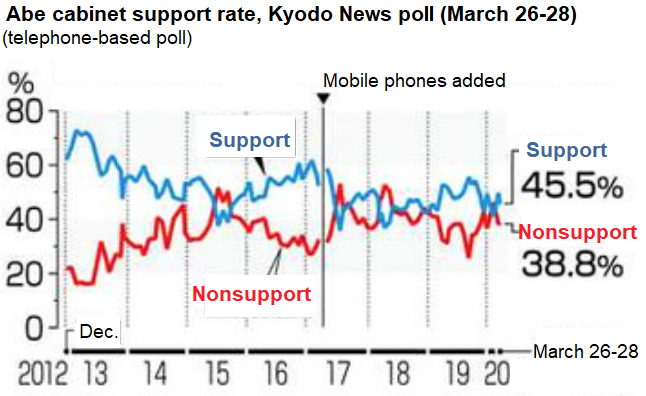 TOKYO — A total of 78.7 percent of people think the decision earlier this week to postpone this summer’s Tokyo Olympics for about one year due to the global coronavirus pandemic was “appropriate,” a Kyodo News spot survey showed Saturday.

The three-day nationwide telephone poll conducted from Thursday also found that 11.1 percent were in favor of delaying the Summer Games, initially due to begin July 24, for about two years. While 5.9 percent said the games should have been canceled, 1.8 percent wanted them to be held by the end of this year.

Prime Minister Shinzo Abe and International Olympic Committee President Thomas Bach agreed Tuesday to the unprecedented delay of the games for about one year in a teleconference.

But the decision raised concerns over the considerable logistic challenges and extensive reshuffling of the coming year’s international sports calendar.

As for emergency measures to ease the impact on Japan’s economy from the outbreak, 43.4 percent preferred reducing the consumption tax rate, which was raised to 10 percent from 8 percent last October and has weighed on household spending and business investment.

To underpin consumer spending, 32.6 percent said they favor cash handouts, a measure being considered by the government and ruling coalition.

As far as the outlook on coronavirus infections in Japan was concerned, 74.5 percent expected the virus to spread further while 21.1 said it will fade out.

The poll also found the approval rating for Abe’s Cabinet has fallen 4.2 percentage points to 45.5 percent from the previous survey conducted on March 14-16.

[Asked who would be appropriate to serve as the next prime minister, 20.9% said former Liberal Democratic Party Secretary-General Shigeru Ishiba, down 1.7 percentage points from the previous survey in which the question was asked (Feb. 15-16 poll). Meanwhile, 17.8% of respondents in the recent poll said Prime Minister Shinzo Abe would be best as national leader, up 4.4 points, and 10.6% thought that Environment Minister Shinjiro Koizumi would be best as the next prime minister, down 1.4 points.

[Polling methodology: The spot survey was conducted by telephone on a computer-aided random digit dialing (RDD) basis over the three-day period of March 26–28, 2020, targeting voters across the nation. However, the survey excluded landline numbers in some areas of Fukushima Prefecture. The survey covered 728 randomly selected households with eligible voters nationwide [by landline phone], with responses collected from 511 people. A total of 1,285 people were accessed through their mobile phones, of which 521 responded.]