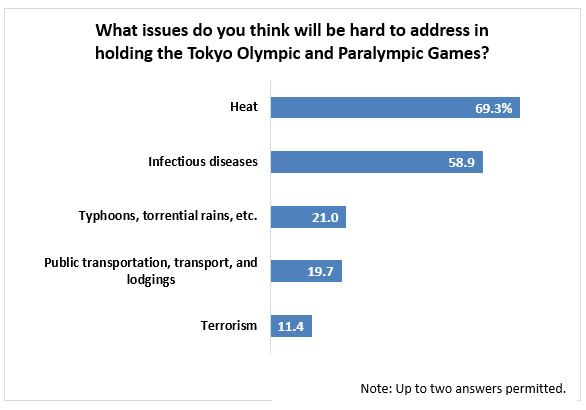 On the two days of Feb. 29–March 1, 2020, Nihon Yoron Chosakai conducted a nationwide poll on the Tokyo Olympic and Paralympic Games, through face-to-face interviews. A total of 77% of respondents said they are either “interested” or “generally interested” in the Games. The poll asked pollees what issues they thought would be hard to address in holding the Games. Given a list of items to choose from and asked to select up to two, 69% of respondents said the “heat” and 59% said “infectious diseases,” such as coronavirus. These two responses were by far the most frequently selected. (Abridged)

[Polling methodology: The survey was implemented on Feb. 29–March 1, 2020, based on face-to-face interviews conducted by pollsters.