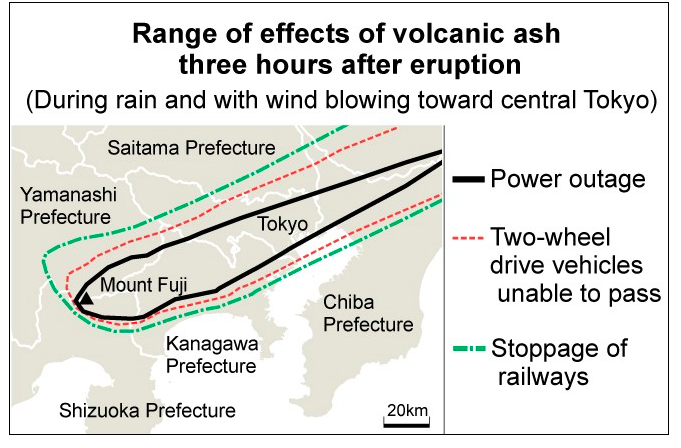 The greater Tokyo metropolitan area would effectively cease to function within hours of a full-scale eruption of Mount Fuji, according to the first government simulation of such an event in the modern age.

A government panel warned that the outcome would be devastating: transportation crippled, roads rendered unusable and no power, for starters.

Food and product deliveries would stop, too–even if only a relatively small volume of volcanic ash was dumped.

While past eruptions led to ash falling across vast swathes of the Kanto region, there has never been a detailed calculation of the effects of such an eruption on modern society.

A working committee under the government’s Central Disaster Management Council on March 31 released its estimates of what would unfold should Mount Fuji erupt on a scale of the Hoei eruption in 1707, the last time the sacred peak blew its top.

It was estimated that about 490 million cubic meters of volcanic ash would have to be removed from the greater Tokyo metropolitan area, or roughly 10 times the amount of debris that had to be cleared following the 2011 earthquake and tsunami disaster.

The committee also came up with estimates of accumulated ash in various parts of the Kanto region in the event an eruption continued for about two weeks and winds were blowing in the direction of central Tokyo.

After 15 days, the panel estimated that accumulated ash would reach about 10 centimeters in Tokyo’s Shinjuku Ward, about 3 cm in Narita, Chiba Prefecture, about 2 cm in Yokohama and about 30 cm in Sagamihara, Kanagawa Prefecture.

But the committee issued a caveat that the figures would also be greatly affected by the weather as well as wind direction and speed.

The effects on daily life would be devastating even with low levels of volcanic ash.

If it rained, 3 cm of ash falling on roads would render them impassable for all two-wheel drive vehicles. With even 0.5 cm, huge traffic snarls would occur because of the poor visibility.

The committee calculated that if more than 3 cm accumulated in an area, it would take 1,000 bulldozers and other heavy equipment about three entire days to clear enough space to allow emergency vehicles to pass.

Railways would be stopped by even minimal amounts of volcanic ash. That result would be felt in all parts of Tokyo just three hours after an eruption, with the effects spreading to the entire greater Tokyo metropolitan area by the second day.

Airport runways would be unusable with only between 0.04 and 0.20 cm of volcanic ash. And because many jets fly in the vicinity over Mount Fuji, there would also be a severe restriction on the number of flights.

The panel said it was likely that large ships would be unable to navigate into Tokyo Bay due to poor visibility.

There is also the possibility of power outages with just 0.3 cm of volcanic ash during rain. Thermal power plants would be unable to operate if more than 6 cm of ash fell.

Mobile phone networks would also be severed if volcanic ash piled up on communication antennas because of rain.

Water supply could also be affected, either by impurities entering the water supply or because of the supply being cut off completely.

Wooden homes could collapse if more than 30 cm of volcanic ash accumulated on rooftops during rain. The committee said that danger warranted evacuations before an eruption.

People with respiratory problems such as asthma or bronchitis would experience a worsening of their symptoms.

While Mount Fuji currently shows no sign of being about to blow its top, the committee report warned that it would be difficult to continue with ordinary life and economic activity should an eruption occur.

It touched on the need for local governments and infrastructure companies to compile disaster management plans beforehand.