Concern that pandemic might erode U.S. deterrence in Pacific region 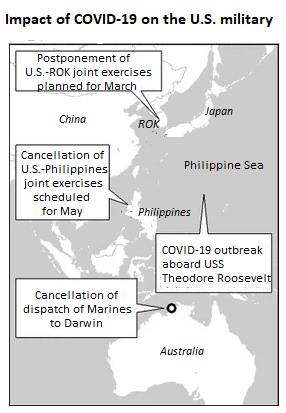 By Kazuhiko Makita in Washington, D.C., and Takeyuki Hitokoto in Jakarta

Amid the coronavirus pandemic, there is an increasing number of cases among the U.S. forces deployed around the world. To prevent the further spread of the virus, the U.S. military has decided to halt the movement of troops and suspend exercises. If this situation were to become prolonged, it could weaken the U.S. military’s readiness, and there are concerns that it could impact the security environment in the Pacific and Europe.

According to the U.S. Department of Defense, a total of 603 military personnel have tested positive for the coronavirus as of March 30. This represents a more than eight-fold increase in 10 days. The USS Theodore Roosevelt, a flattop deployed to the Pacific region, saw an outbreak of coronavirus after making a port call at Da Nang, Vietnam, in early March. All 5,000 crew members aboard the aircraft carrier are now being tested in Guam for the virus. There are also reports that some crew members aboard the USS Ronald Reagan, an aircraft carrier based in Yokosuka, have been infected with the coronavirus. The U.S. military announced its first coronavirus death on March 30 after a soldier in the New Jersey Army National Guard passed away.

To maintain its readiness framework, the U.S. military is rushing to try to contain the spread of the virus among the military’s ranks. On March 25, the Department of Defense announced it would in principle halt for 60 days the overseas dispatch of U.S. troops and suspend exercises requiring the movement of troops.

These kinds of measures, however, also present the risk of undermining the U.S. military’s readiness. At a press briefing on March 23, Defense Secretary Mark Esper admitted that “(the coronavirus) may have some impact on readiness” if the pandemic were to be prolonged. An internal notice circulated within the DOD on March 27 warned that “hostile forces may capitalize on this crisis.”

The concern presented by the possibility of limited U.S. military activities in the Asia Pacific region is the decline in the ability to deter China.

On March 30, the Australian Department of Defense announced it would cancel this year’s deployment of U.S. forces to Darwin – the 2020 Marine Rotational Force – to slow the spread of the virus. According to Australian national broadcaster ABC, the 2020 rotation was expected to bring about 2,500 Marines to Darwin as soon as early April.

Given its location near Southeast Asia, Darwin is a military hub. If the U.S.-Australia presence were to weaken, it might give China an advantage in its quest to militarize the South China Sea. Australian Defense Minister Linda Reynolds said that Australia would consider recommencing the deployment as circumstances demanded, emphasizing in a statement that “the two countries (Australia and the United States) will continue to fulfill their role in regional security.”

The annual military exercises between the Philippines and the United States known as Balikatan were scheduled for May but have also been cancelled. According to the Philippine Inquirer newspaper, 11,000 military personnel from the two countries were expected to participate in the exercises.

In February, the Philippine government notified its U.S. counterparts that it would abrogate the Visiting Forces Agreement shared by the two nations. The agreement is set to expire in August, and it was thought that the May exercises would be the final large-scale exercises between the two countries for the immediate future.