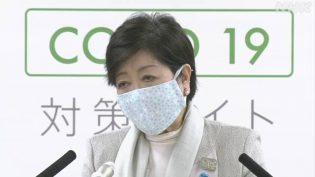 NHK reported that Tokyo Governor Koike held a press conference at 2 p.m. today and announced the business types that will be requested to temporarily close under the state of emergency. According to the network, Koike requested the temporary closure of businesses in six categories: entertainment facilities, universities and cram schools, athletic facilities, theaters, exhibition halls, and commercial establishments. Koike reportedly said that medical facilities and shops that sell daily necessities are needed to maintain social functions and requested them to continue operating normally. The Tokyo governor added that the measures will take effect at 12 a.m. on April 11. As for drinking establishments, including Japanese-style izakaya pubs, Koike reportedly asked them to limit their business hours to 5 a.m. to 8 p.m. and stop serving alcohol at 7 p.m. In addition, Koike reportedly announced that the Tokyo government will provide subsidies to small and mid-sized companies that fully comply with the government’s requests.