Saturday’s Ryukyu Shimpo led with a report on an incident that apparently occurred at a hangar at MCAS Futenma at around 4:45 p.m. on Friday, in which foam extinguisher containing perfluorooctanesulfonic acid (PFOS) leaked out of the base to a river through an adjacent drain after a fire extinguishing system was activated at the facility. The paper wrote that the foam flowed out to residential areas in the city of Ginowan. Ginowan Mayor Matsukawa reportedly said that the incident was very regrettable and that Colonel David Steele, commander of the Futenma Air Station, notified him of the incident and offered an apology by phone. Okinawa Times ran a front-page article saying that the U.S. military notified the Ginowan City Government of the incident at around 5:30 p.m. on Friday. The paper also wrote that although the U.S. military explained to the Defense Ministry’s Okinawa Bureau that the foam extinguisher contained PFOS, it did not disclose the amount of foam that leaked or the specific location of the incident. The paper noted that the foam reached an area where a childcare center is located. 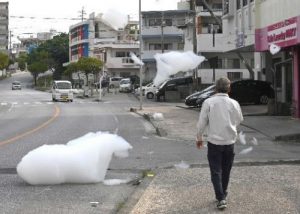 The Sunday editions of both papers gave extensive coverage to the incident. Ryukyu Shimpo wrote that a large volume of leaked foam was still in the river on Saturday because municipal firefighters were unable to remove all of it on Friday. The paper alleged that a large volume of the foam is still there because neither the central government nor the U.S. military conducted a cleanup operation outside the base. The paper also wrote that Lt. Col. Neil Owens of the government and external affairs office of U.S. Marines in Okinawa told a Ginowan official that 4,000 liters of foam extinguisher is stored at the Futenma base. The paper wrote that Col. Steele allegedly told a Ginowan official on Saturday that the situation will settle down when it rains in the area. The paper wrote that local residents reacted strongly to the commander’s alleged statement.