Virus fears cause patients to flock to big Tokyo hospitals 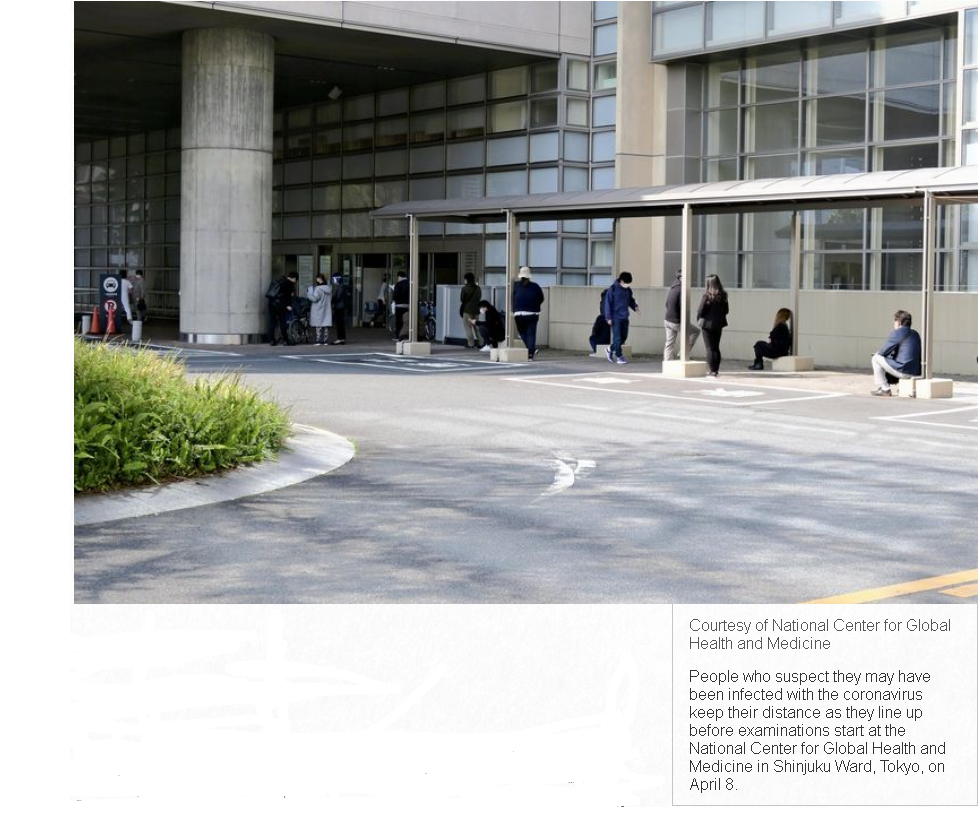 The nation’s medical system is being strained as cases of the new coronavirus spread, especially in large cities. What is occurring on the front lines as medical facilities face a crisis unlike any other?

As hospitals are stretched dealing with coronavirus infections, the impact is also being felt in the diagnosis and treatment of other emergency cases. According to Shinji Murai, head of Ogikubo Hospital, a core hospital in Suginami Ward, Tokyo, the situation is desperate.

“Last week alone, there were two days when we had to turn away urgent patients who had apparently suffered heart attacks,” Murai said at a press conference Monday.

Conversely, many reports have described patients suspected of having the coronavirus being unable to find a medical facility able to treat them, instead getting passed around from hospital to hospital.

In early April, a man with pneumonia arrived at Jikei University Harumi Triton Clinic in Chuo Ward, Tokyo. The man was suspected of having the coronavirus, but attempts to transfer him to another hospital continued to fail, with at least 20 hospitals refusing to accept him. It took five hours until a hospital willing to accept the man was finally found late that night.

Around that same time, the head of a midsize hospital in Tokyo was scrambling to transfer a patient suspected of having coronavirus to another hospital because his condition was becoming increasingly serious. The hospital head’s efforts came up empty, even after he consulted with a public health center. In the end, he was told, “Please directly ask them yourself.” The system under which public health centers arrange for medical facilities to take in infected patients was essentially broken.

Large hospitals and hospitals designated for treating patients with infectious diseases also were struggling to cope with a surge in patients. According to the government’s policy, in the current situation in which a state of emergency has been declared, such hospitals should concentrate on treating severe cases, and other patients should, depending on their condition, recuperate or be treated at regular hospitals, at home or in accommodation facilities. However, this division of roles has not always gone smoothly.

“Big hospitals are being swamped by everyone ranging from people who are worried but don’t even have symptoms, to those who have serious symptoms and should be treated there,” said Tamotsu Miki, director of Tokyo Medical University Hospital in Shinjuku Ward.

Hospitals directly facing these issues have started to take action to ease their plight.

On Wednesday, the launch of a diagnosis and medical treatment system jointly operated by medical facilities of all sizes in Shinjuku Ward ranging from general practitioners to major hospitals, including those of Tokyo Medical University and the National Center for Global Health and Medicine, was announced. Testing areas dedicated to PCR tests will be established and staffed in rotation by doctors from the ward. Patients will be triaged based on severity of their condition to determine at which hospital they will be treated.

About a week ago, a tent set up on the premises of the center for patients who had developed a fever received more than 100 people per day. The system has launched in response to the surge in infections in Tokyo around that time, which was causing increasing concern in many quarters.

“Administrators also were being overwhelmed and feeling the strain,” said Norihiro Kokudo, president of the center. “We wanted to do something by having medical facilities in the area work together.”

Four midsize hospitals in Suginami Ward, including Ogikubo Hospital, were a step ahead, setting up dedicated outpatient areas and starting countermeasures in tandem with ward authorities and the local doctors association.

Now is the time to swiftly use every option available to prevent the medical treatment system from collapsing.