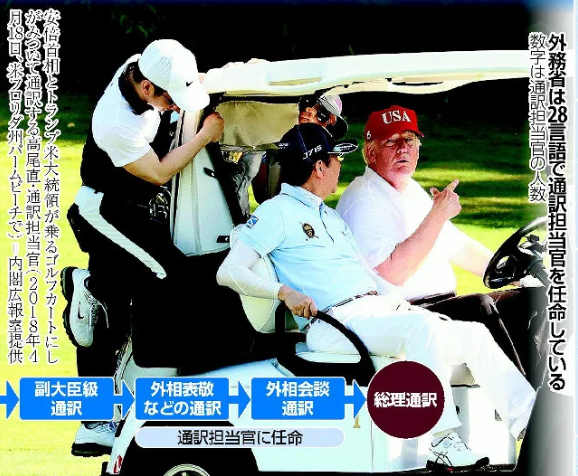 Interpreters are language specialists who support world leaders and bureaucrats in the diplomatic arena, where national interests are determined. They are “invisible,” but their correct or mangled interpreting sometimes affects diplomacy, prompting interpreters of the Ministry of Foreign Affairs (MOFA) to study everyday to also serve as diplomatic specialists.

In January 1983, the U.S. newspaper Washington Post reported that (then) Prime Minister Yasuhiro Nakasone, who was visiting the U.S., said in an interview that Japan should be “an unsinkable aircraft carrier.”

Back then, the U.S. was increasingly distrustful of Japan following the remark made by Nakasone’s predecessor, Zenko Suzuki, that the term “alliance” included in the summit joint statement “has no military implications.” But the U.S. perceived Nakasone’s “unsinkable aircraft carrier” remark as a message that Japan will play a military role. The remark improved the bilateral relationship.

But in fact, Nakasone did not use the term “unsinkable aircraft carrier” in the interview. It is reported that an interpreter loosely interpreted Nakasone’s remark that he “would turn the Japanese archipelago into something like a ship with walls high enough to prevent the invasion of the (Soviet Union’s) Backfire bombers.” But Nakasone, who learned of the U.S.’s positive response, said the expression “doesn’t need to be changed.” So the remark stood and became historic.

On the other hand, when (then) Prime Minister Kakuei Tanaka visited China in September 1972, he said, “Japan caused serious damage to China” when referring to the Japanese military’s past deeds during a reception. But his interpreter translated the remark as a Chinese expression of an apology for a small mistake, causing a backlash from China.

Sunao Takao, who serves as the prime minister’s English interpreter, joined MOFA in 2003 and works to coordinate  overall diplomatic work as chief administrative official under the section chief in the Policy Coordination Division of the Foreign Policy Bureau. According to a source, Takao sometimes helps to smooth the progress of conversations. When Prime Minister Shinzo Abe was at a loss for an answer to U.S. President Donald Trump’s criticism of the leader of a certain country during a Japan-U.S. summit, Takao used his wit and joked, “I think so, too,” which made President Trump burst into laughter. The U.S. president likes Takao and calls him the “little Prime Minister.” (Abridged)