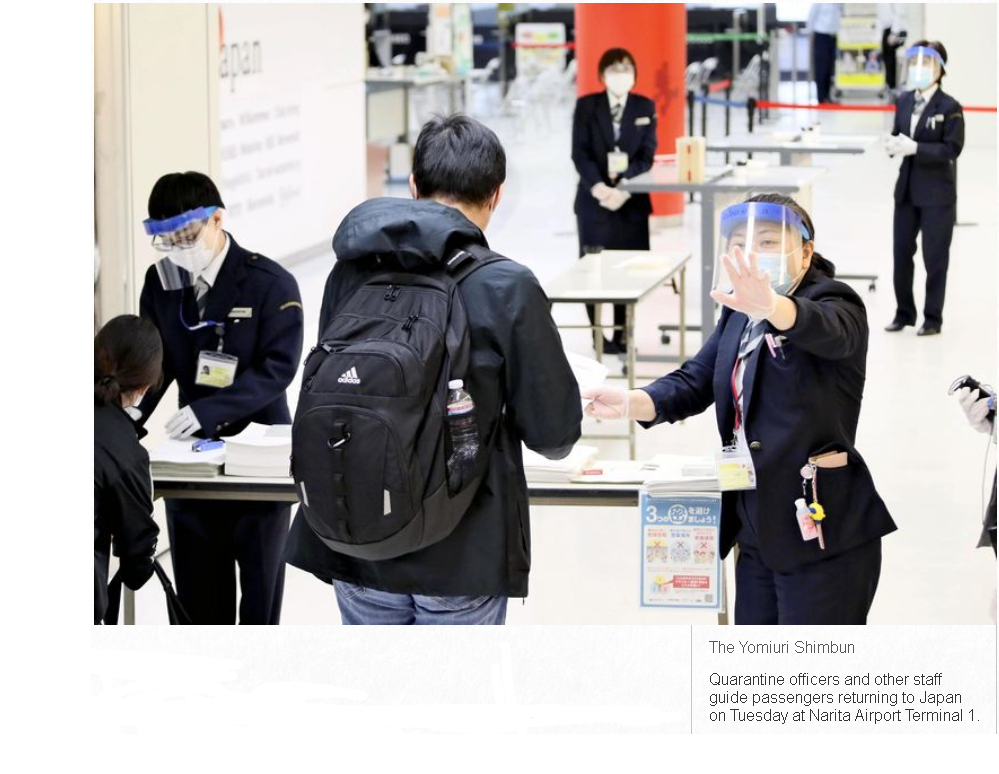 Quarantine officers from all over the country have been dispatched to Narita Airport to help in the effort to prevent people infected with the new coronavirus from spreading it domestically.

The officers have been sleeping in break rooms and nearby hotels to deal with early morning and late night arrivals. Their fatigue is evident.

“NH [All Nippon Airways] and KE [Korean Air] passengers are next. Please take your places,” a quarantine officer wearing both a mask and a face shield told similarly equipped colleagues just before 4 p.m. Tuesday at Narita Airport Quarantine in Chiba Prefecture.

To avoid crowding and close contact in lines, about 10 people are led off the aircraft at once.

“When were you in the United States?”

“What are your plans after returning to Japan?”

The officers asked returning passengers rapid-fire questions while holding a non-contact thermometer close to their heads to check for fever.

The passengers then underwent PCR tests to check for the new coronavirus. They were guided to three booths separated by screens, where mucus swabs were taken from their noses.

Passengers coming from major European countries and elsewhere were added to the scope of testing on March 27, causing the number tested per day to jump to several hundred. Immediately after testing was expanded to 73 countries and regions including the United States and Britain on April 3, the number increased to well over 1,000 per day at its peak.

With the number of flights arriving down by 80% compared to normal times, currently close to 1,000 passengers are tested, depending on the day.

While it can take as little as 10 minutes to pass through the quarantine station, in the early morning and evening when many flights are arriving passengers sometimes have to wait nearly two hours on board.

“The tests find a few people per day who are infected,” a veteran officer said. “We’re near the brink physically and mentally, but our only thought is to stop the virus at the border.”

In front of Terminal 1, Self-Defense Forces members in personal protective equipment were loading onto a bus the luggage of returning passengers’ waiting for test results.

The bus was headed to a boarding area for a government chartered flight to Chubu Airport in Aichi Prefecture, about 340 kilometers away.

Tests results can be ready in about 6 hours, but with more countries and regions being tested it now takes one or two days.

In the meantime, returning passengers are put up at hotels near Narita Airport at the government’s expense, though there have been days when there were not enough rooms and some people have had to sleep on cardboard beds at the airport.

Since April 7, the government has been operating one charter flight per day specially for returning passengers. They are taken to Chubu Airport, which has suspended international flights, to wait for their test results in a dedicated hotel near the airport.

A 66-year-old man from Eniwa, Hokkaido, arrived from Vietnam on the afternoon of April 11. After learning he was negative for the virus he was returned to Narita Airport on April 13.

However, because the government is asking people to refrain from using public transportation for two weeks after returning to Japan, even if they have tested negative, he has given up on returning home anytime soon.

“There’s nothing I can do but find a cheap hotel where I can stay until I can catch an airplane or train. I want to get home quickly, but …” he said tiredly.

Being the “gateway to Japan,” Narita is usually bustling with tourists, but with about 80% of its 316 restaurants, souvenir shops and other stores closed, the airport is quiet.

Yet one sector is dealing with a rush of customers — car rental outlets.

According to an employee of a major franchise, “We’re fully booked three or four days out.”

Most of the customers are returning passengers who have been asked not to use public transportation or their family members.

A 63-year-old woman from Kashiwa, Chiba Prefecture, came to the airport by train to meet her daughter, 34, who had been studying in Taiwan.

Relieved to finally find an available car at the third rental car company she tried, her expression soon clouded over.

“My daughter could be infected,” she said. “It’ll be hard not to have contact with her even after getting back home.”

Quarantining of passengers returning from overseas is currently being conducted mainly at three airports — Narita, Haneda and Kansai.

All passengers returning from the 73 countries and regions subject to entry bans are screened for the virus, but the government has struggled to provide them with hotels and other lodgings as they wait for the results.

Even people whose tests are negative are asked to shelter at home for 14 days and take their temperature every day.

Public health center staff have been using phone calls and email to check for fevers, but to make it easier for returning passengers to respond, starting Tuesday they have been able to use the free messaging app LINE.