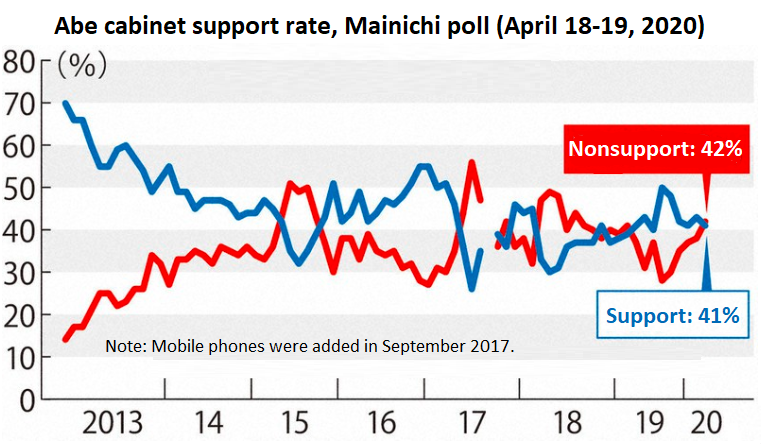 In the nationwide public opinion poll conducted by the Mainichi Shimbun on April 18–19, 53% of respondents said that they “do not think highly” of the Abe administration’s response to the new coronavirus, exceeding the 39% who said they “approve” of the government’s efforts. In the previous poll conducted on March 14 and 15, nearly half (49%) approved the government’s efforts to bring the virus outbreak under control, while 45% disapproved. The decline in support for the government’s measures is thought to be due to the confusion surrounding the state-of-emergency declaration and the distribution of cash handouts to citizens.

Respondents were split in their views of the Abe cabinet. Some 41% reported that they support the cabinet, down from 43% in the March poll, while 42% said they do not back the cabinet, up from 38% last month. This is the first time in 13 months, since the March 2019 poll that the nonapproval rate has exceeded the approval rate.

Asked for their views on the government plan to send a cash handout of 100,000 yen to every citizen, regardless of income, to help lessen the blow of the coronavirus, 50% of respondents said it is “appropriate” while 19% said it is “too little” and 9% said it is “too much.” Meanwhile, 83% said that broadening the scope of the state of emergency to include the entire nation is “appropriate.”

In the spot poll conducted on April 8 by the Mainichi Shimbun and the Social Survey Research Center among others, 46% said that the policy to give 300,000 yen cash handouts to certain households was “insufficient,” exceeding the 22% who said that it was “appropriate.” The spot poll also found that most pollees were critical of the government handling of the coronavirus. Some 70% said that the state of emergency declaration came “too late” while 58% said that the target area “should be broader.” No direct comparison can be made with the recent poll; however, as the polling methodology was different.

Even if pollees approved of Prime Minister Shinzo Abe’s later change in coronavirus policy, he recent poll seems to show that the public views the change as too late.

This is the first time that the support rate for the CDPJ, which was formed in 2017, has fallen below that of Nippon Ishin. Osaka Governor Hirofumi Yoshimura’s strong messages about the new coronavirus may be boosting Nippon Ishin’s support rate, while the CDPJ’s rate declines.

[Polling methodology: The survey was conducted by pollsters over the two-day period of April 18–19, 2020, targeting landline and mobile telephone numbers across the nation on a computer-aided random digit sampling (RDS) basis. The survey excluded landline numbers in municipalities designated as “difficult-to-return” zones due to the Fukushima Daiichi Nuclear Power Plant accident. Valid responses were received from 676 persons (out of the 1,054 households with one or more persons age 18 or over) for landline numbers and 727 persons (out of the 884 persons age 18 or over who answered) for mobile numbers. The valid response rates were 64% for landline numbers and 82% for mobile numbers.]