Pace of increase in new infections slows slightly in 7 prefectures 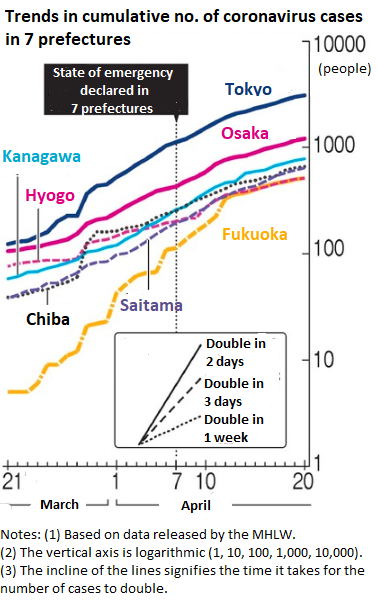 By Hisatoshi Kabata and Ryutaro Ito

Two weeks have passed since a state of emergency was declared in the seven prefectures of Tokyo, Kanagawa, Saitama, Chiba, Osaka, Hyogo, and Fukuoka. The cumulative number of coronavirus cases continues to increase in all seven prefectures, but the doubling time, namely, the time it takes for the number of cases to double, has lengthened. Prior to the declaration, Fukuoka was seeing its number of cases almost double every three days or so. In the past one week, however, the pace of increase dropped compared with April 7. The six other prefectures saw their number of cases double every week or so around the time of the declaration, but in the past one week have seen a slight slowing. Although the pace of increase has slowed, it remains difficult to foresee how long it will take to get the coronavirus situation under control.

Due to the incubation period of the new coronavirus, it is thought that the number of cases reported reflects the status of infections about two weeks prior.

Based on location data gathered by AGOOP Corp., a subsidiary of Softbank, the cumulative population per week was calculated for the area within a 500 meter radius of major stations in the seven prefectures (as of 3:00 p.m. every day). For the week ending April 6, the cumulative population around Shinjuku Station was down by about 18% from the previous week. For the week starting April 7, the figure was down by 33% from the previous week and, for the week starting April 14, it was down about 28% from the prior week. All seven prefectures saw major decreases after the declaration.

Hospitalized patients who have recovered cannot be discharged immediately. Therefore, the cumulative number of patients continues to increase, and there is a great risk that healthcare settings will come under greater strain, including a shortage of hospital beds.

Yoshihiro Takayama, deputy director of the Infectious Diseases Department at Okinawa Chubu Hospital, says, “The impact of our efforts to avoid unnecessary outings will come into view. We will know whether Japan’s cluster countermeasures, voluntary prevention measures, and other methods have been effective and whether they should be continued.”