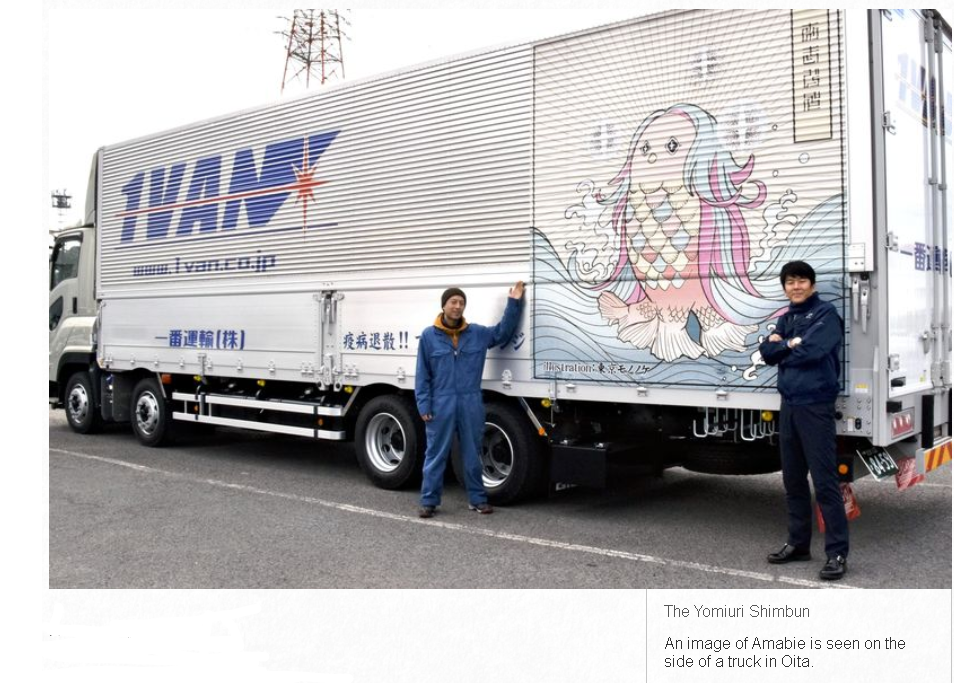 “When the time of an epidemic arises, duplicate my image and display it to the people.”

These are the fabled words of Amabie, a yokai supernatural being that is said to have appeared in the sea off Higo, the old name of Kumamoto Prefecture, 174 years ago.

As the new coronavirus infection began to spread, people began to talk about Amabie on social media. The imaginary character has been officially adopted by the Health, Labor and Welfare Ministry to promote awareness about the virus.

Legend has it that Amabie appeared in the sea off Higo in mid-April in 1846, according to Eishun Nagano, an employee at the Fukui Prefectural Archives who has written a dissertation on the yokai.

A kawaraban newspaper published toward the end of the Edo period (1603-1867) contains a report that a shining object appeared in the sea and that when an officer went to examine it, Amabie appeared and said “You will have six fertile years from this year. But there will be an epidemic. Duplicate my image and display it to the people.”

The drawing accompanying the story depicts Amabie as having long hair, protruding lips and a body covered in scales with three fins.

This is the only remaining historical source material featuring Amabie, although there are more kawaraban papers covering a similar yokai called Amabiko, which reportedly said, “Those who replicate and gaze upon my image in morning and evening will avoid sickness.” Those kawaraban papers were sold as a protective charm as well.

Fast forward to the current Reiwa era, the image has been spread through means such as social media, and the health ministry is using the character to raise awareness in preventing infection.

Ichiban Unyu, a transport company in Oita, has adorned the sides of a truck of the company with an image of Amabie.

The company’s president, Noriyasu Fujita, came across an image of Amabie created by illustrator Tokyo Mononoke while browsing on the internet. It was then an idea came upon him: “If we put the drawing on our truck, it may put those who see it at ease.” He then contacted the illustrator.

The company’s businesses include the printing of images on trucks. Utilizing the appropriate machinery, the company printed Tokyo Mononoke’s design of Amabie on panels on both sides of a truck. The image, about 2.6 meters tall and about 2.5 meters wide, is accompanied by the slogan: “Ekibyo Taisan!! Amabie challenge” (Epidemic, disperse!! Amabie challenge).

“Because our lives have been very tense, I hope that this will relax people a little bit,” Fujita, 50, said.

At the Kibo no Wa workshop in Okinawa City, Okinawa Prefecture, which offers job assistance to disabled people, clips were made bearing illustrations of Amabie, which are given to people who buy handmade masks. Rumiko Miyahira, the workshop’s service manager, learned that Amabie was becoming popular on the internet, and Ishiko Nakaima, a user of the facility with a penchant for drawing, did the illustrations, making sure that Amabie looked like a yurukyara cute and cuddly promotional character to appeal to children as well. The Amabie in the illustrations has a variety different hair colors, such as black, blonde and pink.

“Our battle with the coronavirus may be a long one,” Miyahira said. “I hope people will use the clips as a substitute for an amulet.”