Crimes seizing on coronavirus outbreak on the rise 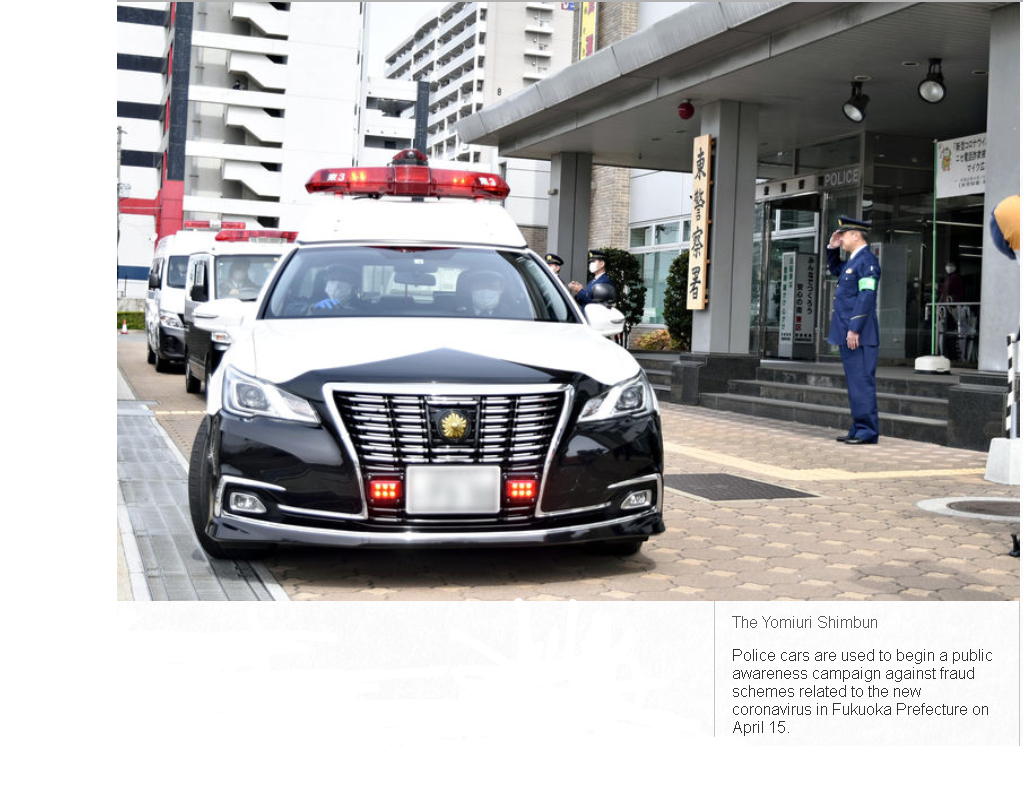 Amid the spread of human misery caused by the outbreak of the novel coronavirus, some age-old fraud schemes and outright thefts have been occurring in succession.

Among the reports of criminal activity are frauds to steal the uniform relief payments of ¥100,000 to each person, which is expected to start as early as in May, and thefts targeting stores and outlets that are temporarily closed in response to requests from local governments under the state of emergency.

There has also been an increase in crimes committed by those who have become badly affected by the economic impact of the pandemic. And it is feared that domestic violence and child abuse may increase, as the stress of practicing self-restraint in going out continues, putting police across the country on high alert.

On April 22, a man in his 60s living in Akiruno, Tokyo, received a phone call from a man pretending to be a policeman. On the same day, a suspicious phone call was made to a house of a woman in her 70s in Nishitokyo, Tokyo, saying, “I will deliver ¥100,000 to your house.” Both of them consulted the Metropolitan Police Department and did not fall prey to the scam, according to police investigators.

Immediately after Prime Minister Shinzo Abe announced on April 17 that a payment of ¥100,000 will be made uniformly to each person, suspicious phone calls started to be confirmed in various parts of the country.

On April 24 in Ashikaga, Tochigi Prefecture, a man in his 20s who showed up at the house of a man that received one these suspicious phone calls was caught red-handed on suspicion of attempted fraud.

According to the National Consumer Affairs Center of Japan, the number of consultations made over trouble related to the new coronavirus totaled about 22,000 as of Wednesday. Besides suspicious phone calls, criminal phishing scams have been confirmed, such as perpetrators sending e-mail under the guise of “confirmation of your whereabouts for distributing ¥100,000,” guiding recipients to a fake URL (uniform resource locator) in order to steal bank account numbers and other information.

According to the National Police Agency, the damage caused by fraudulent acts in connection with the new coronavirus amounted to a combined estimated total of ¥31.17 million in 32 cases in Tokyo and 12 other prefectures as of April 27.

Besides scams related to the ¥100,000 payments from the central government, there is a fear that similar confidence tricks may take place involving the “cooperation money” that is to be paid to business operators who close their shops and stores in response to requests from local governments.

Meanwhile, at such places as stores temporarily closed due to the impact of the pandemic, damage from burglaries has also been reported.

In Owariasahi, Aichi Prefecture, about ¥10 million in store funds was stolen late Monday from a local supermarket after it closed for the day. Also, in Tokyo, cash has been stolen from unmanned restaurants in succession since the start of last month, causing police to reinforce their patrols, mainly in shopping areas.

On the other hand, there has also been a series of cases in which those who have lost their livelihoods as businesses shut down to control the spread of the outbreak took to committing crimes of desperation.

On April 23 in Toshima Ward, Tokyo , a temporary worker in his 60s broke into a supermarket after closing time and stole about 20 items, including instant noodles, rice and vegetables. The man told police during questioning, “Because of the impact of the coronavirus, I lost my job, run out of money and got hungry.”

In Yokohama on April 25, a 23-year-old female employee of a real estate company was stabbed with a knife and robbed of her bag, which contained several thousands of yen in cash. On the following day, a 24-year-old unemployed man was arrested on suspicion of robbery and attempted murder.

The man told police, “I became unable to continue working at a sex establishment where I was working, due to the coronavirus, and I was hard up for money.”

Incidents of domestic violence and child abuse have also been taking place.

In Edogawa Ward, Tokyo, on April 6, a 60-year-old man who had a quarrel with his 57-year-old wife over a decline in their income fatally abused her. He was indicted on a charge of inflicting bodily injury resulting in death.

On April 22 in Takasaki, Gunma Prefecture, a 4-year-old boy was taken to a hospital by ambulance, but died on the following day. The boy’s mother, 25, and her former boyfriend, 27, were arrested on suspicion of inflicting violence on the child leading up to that day.