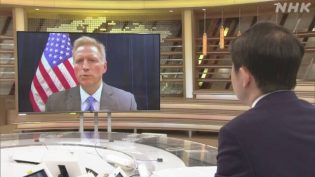 NHK reported on its interview with Chargé d’Affaires Young in its “Kokusai Hodo 2020 Special” program that aired from 6:05 p.m. to 6:45 p.m. on May 3. The network opened the show by saying that with the U.S. presidential election six months away, Japan is facing critical challenges with the Trump administration such as bilateral cooperation on measures to combat COVID-19 and the review of Japan’s host nation support for the U.S. military. In a televised interview conducted on May 1, the Chargé said the U.S. sees Japan as one of its critical partners in the fight against the coronavirus and welcomed the GOJ’s response to the pandemic. Concerning the U.S. Embassy’s notice to American citizens in Japan that “the Japanese government’s decision to not test broadly makes it difficult to accurately assess the COVID-19 prevalence rate,” the CDA stated: “Our medical experts continue to have wide-ranging discussions about ways to address this problem, and the best practices on testing are a regular feature of those discussions. Those discussions are ongoing and I think we are going to share the lessons we learned in both countries.”

The program then reported on the review of Japan’s host nation support for the U.S. military that is conducted every five years. When asked by program anchor Shuhei Ikehata about President Trump’s repeated remarks that the U.S.-Japan security cooperation is “unfair,” the Chargé replied: “I think the President was only alluding to his desire that there would be an equitable sharing of the responsibility within our partnership, and that’s the message he is giving to all of our allies and partners around the world.” When Ikehata asked if the negotiations with Japan would be as tough as the ones with South Korea, the Chargé said: “We are waiting for the negotiators to finalize their strategy, but I’m sure once we get to the negotiating table, both sides will bring the kind of understanding that we need to strengthen the partnership and we need to do more and that spirit will infuse the talks.” With regard to China’s maritime activities in the South China Sea, the Chargé was asked whether the U.S. expects Japan to engage in more security cooperation with the U.S. The Chargé responded: “The situation in the region is becoming more worrisome. I think there is an understanding on both sides that we need to do more to strengthen this partnership.” The program also said the Chargé referred to the possibility that the current conflict between the U.S. and China over the coronavirus might shift to cooperation by saying: ”There could be a moment, an opportunity for cooperation with China but that is really going to depend on the Chinese government being open, transparent, honest, and willing to share information, and we would hope that China will be able to live up to those ideals. If China is willing to take advantage of that opportunity, I think there is some potential there.”

NHK-BS1 also aired the interview with CDA Young on its “Kokusai Hodo 2020” program at 10:00 p.m. on May 1. The 40-minute evening show was entirely focused on items related to the COVID-19 pandemic. The program led with President Trump’s remarks to the press on Thursday that he is confident that COVID-19-originated from a lab in Wuhan, hinting at the possibility of taking retaliatory actions against China. The news show also highlighted the virus outbreak’s impact on the U.S. military, reporting on the infections aboard the USS Theodore Roosevelt and USS Ronald Reagan and at Kadena AB. The interview with Chargé Young was aired in this context from 10:09 p.m. to 10:11 p.m.

In response to a question on whether the COVID-19 cases at U.S. bases in Japan are making it difficult for the U.S. military to respond quickly to aggressive moves by China or North Korea, Chargé Young said there is no problem at all because the U.S. military is ready and capable and is taking proactive measures to minimize the risk of the spread of the virus. Ikehata asked what kind of roles the United States and Japan can play in view of China’s presence in East Asia. The Chargé responded by saying the United States and Japan share common values and respond to China through their solid relationships and that the two nations will look for ways to fortify their security partnership to respond to growing risks in the region.

Following the interview, Ikehata and his two fellow anchors briefly discussed the Chargé’s remarks from 10:11 p.m. to 10:12 p.m. Ikehata said he got the impression that the Chargé’s statement that there is no problem with the U.S. military’s operational capabilities despite the coronavirus infection might have been intended to keep China and North Korea in check. Pointing out that U.S. warships had conducted Freedom of Navigation Operations in the South China Sea for two days in a row that week, Ikehata speculated that the United States may be increasing its pressure on China through such actions.