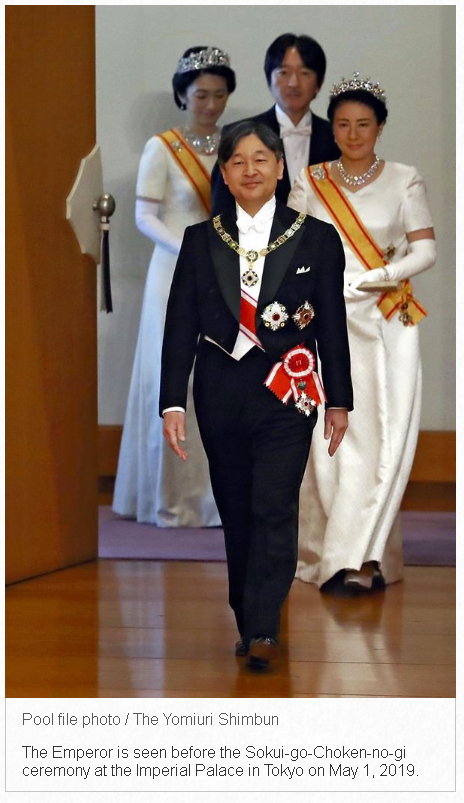 The Imperial family of the Reiwa era has entered its second year amid the crisis caused by the new coronavirus. When the Emperor ascended the throne, he said, “I pledge hereby that I shall act according to the Constitution and fulfill my responsibility … while always wishing for the happiness of the people.”

How will he fulfill his enthronement pledge amid the current situation, which has hindered the Emperor from making contact with people? This story examines the prospects for the Emperor’s future activities by assessing developments around the Imperial family.

The Emperor sometimes represents Japan when visiting foreign countries and on other occasions, but he is not the head of state exercising state power. The Constitution stipulates that the Emperor does not have political authority, and that the appointment of the prime minister is based on designation by the Diet.

At a press conference last month, Imperial Household Agency head Yasuhiko Nishimura took a cautious stance on the Emperor making remarks, citing differences between the current situation and the situation after a major disaster, in addition to the differences between the positions of the Emperor and Britain’s queen. As the virus continues to spread, the prime minister is directly asking the public for cooperation.

“Remarks that would overlap with messages from the government, which has the responsibility of responding to crises, should be avoided,” a senior source of the agency said. “It’s important to determine when to make remarks.”

The Emperor has expressed his hope for an end to the pandemic on the occasions of his birthday, the graduation ceremony of his daughter, Princess Aiko, and an academic lecture given before him. He is currently striving to send as many messages as possible within the conventional framework that has allowed him to do so only “occasionally.”

Keiichi Kawata, a professor at Kanazawa Institute of Technology, pointed out the difficulties for the Emperor in making remarks at a time of emergency and expressed some understanding for the wariness of the Emperor and the agency.

“As a symbol of the unity of people, messages that reach each person’s heart are sought, but if [the Emperor] indicates too much of a position, the messages will become political,” Kawata said.

Due to the coronoavirus crisis, opportunities for the Imperial family to interact with people who have made contributions to society have been lost, as events including a garden party and conferment ceremony were unable to be held. The Rikkoshi-no-Rei ceremony, which will proclaim Crown Prince Akishino’s rise to first in line to the throne, has also been postponed.

The government initially planned to hold the Rikkoshi-no-Rei ceremony even after declaring a state of emergency, by limiting the number of participants to 50. It also pondered having only the heads of the three branches of government attend. However, the government decided to postpone in consideration of the ceremony’s purpose — established by the ceremony committee — of receiving congratulations from people both at home and abroad.

The postponement of this important ceremony, which wraps up a series of ceremonies related to the Imperial succession, demonstrates the Imperial family’s stance that its members are always with the people. However, the situation has changed drastically since the era was changed a year ago amid a mood of jubilation, and people are now forced to exercise self-restraint.

“If activities in which the Emperor can get close to people continue to be suspended, the increased presence of the Emperor as a symbol of the state may diminish rapidly,” said Hideya Kawanishi, an associate professor at Nagoya University. Whether the Imperial family can send messages appropriate to each situation that connect with the public will be a challenge, Kawanishi said.

The direction of their future activities can be seen in the course taken by the Emperor and Empress.

Regarding the Emperor’s stance on his activities related to water issues, one of his aides said shortly after the Emperor took the throne, “State affairs will be given priority.”

On Nov. 25 last year, 10 days after the Emperor’s once-in-a-lifetime Daijosai ceremony, the Emperor said during a meeting with visiting Pope Francis, “I have been highly interested in water issues.”

At his first press conference after his enthronement in February this year, the Emperor also said, “The days have passed swiftly since my enthronement, but I want to continue to work on water issues as long as the circumstances allow.”

The coronavirus pandemic has increased interest overseas in water, although this trend has not been seen much in Japan. In some countries, water business operators immediately provided relevant entities with information on water quality and supply. The overseas media put out warnings early on in areas where there is a shortage of water, which is essential for washing hands.

The Emperor also served as honorary president of the U.N. secretary general’s Advisory Board on Water and Sanitation. There may be more opportunities for the Emperor to use the knowledge and experience he has accumulated.

Last month, the agency announced that the Emperor and Empress provided ¥50 million each to Kodomo no Mirai Oen Kikin (Children’s future support fund) and Japan Voluntary Organizations Active in Disaster, as donations given on the occasion of the enthronement.

The Imperial family receives ¥324 million every year, but according to sources, the money barely covers the expenses for the family’s rituals and events.

“¥100 million is a significant amount. This shows their willingness to support such activities for a long period of time,” a person familiar with the matter said.

People who are providing support for children during the prolonged school closures also welcome such actions by the Imperial couple. “The money can give a boost to our activities,” one person commented.

Some have expressed hope that the Emperor and Empress will take part in new official duties, such as inspecting kodomo shokudo cafeterias where children can eat free or for a low price.