SAPPORO, Japan — For rural Japan, privatization of local airports was supposed to be the magic formula to bring in tourists from around the world, revitalizing regions that had lost growth momentum to an aging and shrinking population.

A steady flow of inbound tourists was thought to reduce the risk for private entities to run the airports. Sales generated from the airport buildings, operated by retail professionals as opposed to bureaucrats, would enable airports to reduce landing fees, in turn attracting more low-cost carriers from across Asia — not just China and South Korea, the two main sources of tourists.

But still in their infancy, these privatization plans have encountered major turbulence as the coronavirus pandemic has cut off tourists from abroad, as well as shrunk domestic travel demand.

At New Chitose Airport near Sapporo, the main gateway to Japan’s northernmost main island of Hokkaido, lights have been turned off at check-in counters for international flights and gift shops have been shuttered. Shops inside the airport had benefited from an influx of tourists from abroad until late last year but now face a crisis. Airport restaurants and shops posted a 76% drop in sales for March.

A clerk at one shop said the store’s future was uncertain, given that daily sales have been as low as 1,000 yen, or $9.

“I’m surprised that there are so few people,” a woman visiting from Ehime Prefecture said. “I’m relieved that the flight I booked will be flying amid all the flight cancellations.”

The pandemic has foiled the plans of regional airports in Hokkaido to improve competitiveness through privatization and joint management.

New Chitose and six airports across the island handed over the rights to operate their terminals to a consortium of 17 companies in January, with full privatization to be completed by March 2021. The plan was to share New Chitose’s competitiveness with the smaller airports and invest a total of 400 billion yen ($3.7 billion) to beef up all seven airports as a whole.

But the coronavirus has shaken the foundations of this project. Wakkanai Airport, the northernmost in the country, had regular service to Tokyo suspended, and it now has only a single route to New Chitose, with the flights almost empty. At Memanbetsu Airport in Ozora, eight of the 12 daily flights had been canceled as of April 28.

New Chitose’s terminal operator decided to reduce or waive rents for March to May at stores whose sales have fallen, but shops continue to shut down. As of April 24, roughly 40% of the 190 or so stores in the airport were closed, according to the company. Most of the stores that remain open have cut their hours.

“This fiscal year’s earnings for the seven airports will change substantially depending on when the coronavirus outbreak settles down,” said an official at Hokkaido Airports, the consortium that includes Mitsubishi Estate and Tokyu. 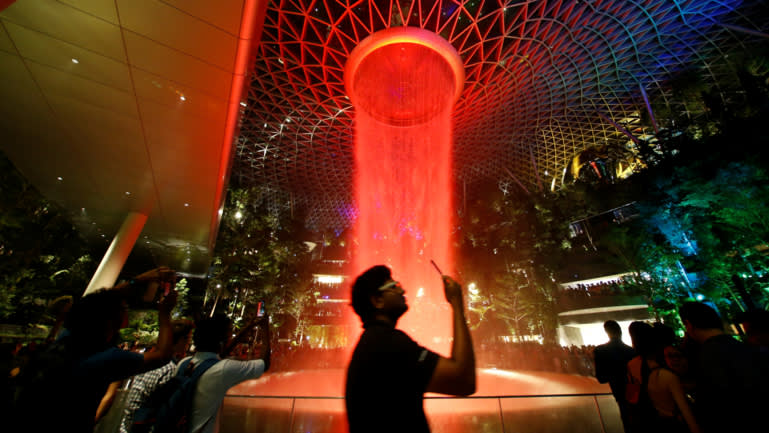 The 40-metre high Rain Vortex, which is the world’s tallest indoor waterfall, is seen from inside Jewel Changi Airport in Singapore. Fukuoka International Airport has brought in an expert from Changi to advise on ways to improve operations.    © Reuters

“The outlook is difficult to gauge,” he said in a news conference.

Fukuoka Airport had projected 25.1 million passengers for fiscal 2019, its first year of privatization. But budget carriers suspended service amid deteriorating Japan-South Korea relations over historical issues, with China routes also canceled as the virus spread. As a result, the airport’s traffic fell 2 million passengers short of the target.

Although the immediate outlook remains clouded, airport operators are preparing for the post-pandemic rebound. Fukuoka Airport counts a veteran from Changi Airport among its team tasked with securing additional routes. Prior to privatizing, Fukuoka’s airport operator did not have a dedicated team, leaving the job of bringing in new routes to the municipality.

Starting in fiscal 2020, the airport is waiving usage fees for newly acquired long-haul international flights for three years. The aim is to attract more service connecting to Southeast Asia, Europe and the U.S. while reducing reliance on China and South Korea.

It’s not as if the desire of consumers to travel has disappeared, according to Teo Chin Leong, an executive officer with experience at Changi Airport. He expressed confidence that airlines will return once the coronavirus passes.