TOKYO — Japan’s major shipbuilders have been maneuvering behind the scenes to win a contract to build the country’s first hospital ship as the coronavirus pandemic threatens to create a shortage of patient beds on land.

Japan inched closer to commissioning a hospital ship, earmarking 70 million yen ($655,000) for a feasibility study in a broader supplementary budget passed last week. Shipbuilding companies have stepped up lobbying efforts to build the ships since March.

“With our vessel type, we can bring this kind of hospital ship to fruition,” said a shipbuilder representative.

Japan Marine United, Mitsubishi Heavy Industries, Kawasaki Heavy Industries and Mitsui E&S Holdings have all reportedly shown interest in the project — which could serve as a potential life preserver to an industry that has been besieged by foreign competition and a global economic slowdown that has led to a dearth of orders.

“Although demand is limited, jobs are scarce in these times,” an executive at a major shipbuilder said. “It is certain that any company will express interest.” 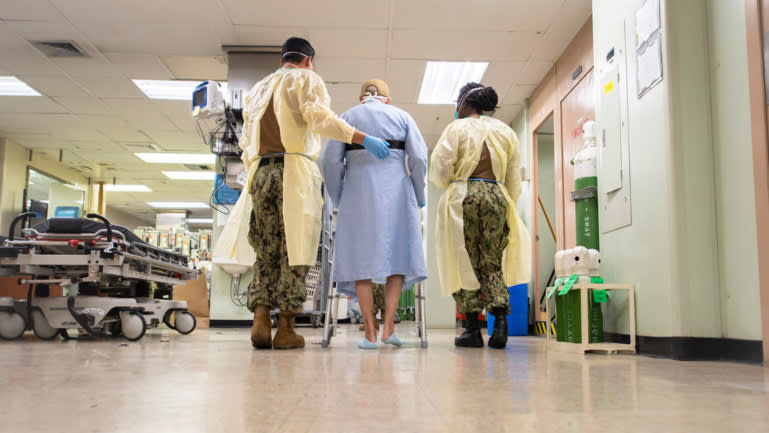 Sailors walk alongside a patient being treated in an intensive care unit aboard the hospital ship USNS Mercy. (Photo courtesy of the U.S. Navy)

A senior manager at another shipbuilder said such a contract would give the winning company prestige. “Winning the order for Japan’s first [hospital ship] will be a huge accomplishment,” said the executive.

Hospital ships have gained traction due to the efforts of a legislative caucus chaired by Seishiro Eto, a member of the ruling Liberal Democratic Party. The caucus in March called for a vessel akin to a long-distance ferry measuring over 200 meters in length and over 20 meters wide.

The price tag for one ship is hefty, with estimates ranging between 25 billion yen and 30 billion yen. It will include 250 hospital beds, as well as a helicopter and a rescue hovercraft.

The plan would be to deploy two hospital ships, one each to Japan’s northern and southern reaches. The aim is to complete designs for the vessels this fiscal year, with construction starting in either the 2021 or 2022 fiscal year.

Although it is far from settled whether Japan will order a hospital ship, shipbuilders are hungry to land the project. The size of such a contract would be equivalent to three large tankers, or five bulk carriers.

Hospital ships were originally built for military use to treat the wounded during wartime. The ships also provide relief to land-based hospitals, and they can dock near natural disasters.

In Japan, hospital ships first became the topic of discussion in 1990 during the Persian Gulf crisis. They were brought up again during the aftermath of the 2011 earthquake and tsunami. In both instances, disputes over the peacetime use of hospital ships, and the costs of maintenance, scuttled those debates.

A proving test was planned for late February onboard the Izumo, the Japanese destroyer that contains dozens of hospital beds and an intensive care unit. Japan Self-Defense Forces personnel were to hold drills in staging temporary medical facilities for disaster areas, with the results to be compiled in a hospital ship manual.

That exercise, however, was postponed as personnel dealt with the coronavirus outbreak on the Diamond Princess. Although the proving test has yet to be rescheduled, the COVID-19 pandemic presents a major opportunity to make hospital ships a reality. 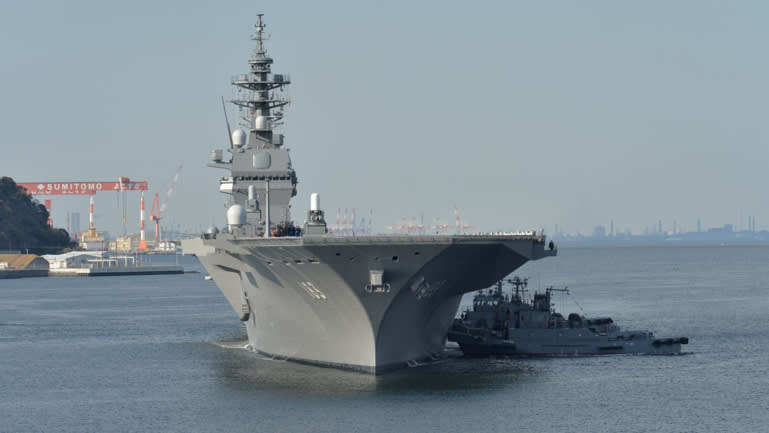 Looking abroad, the U.S. Navy operates the Mercy and Comfort, both converted from supertankers and among the largest hospital ships in the world. With 1,000 beds each and facilities such as operating rooms and X-rays, they are general hospitals of the sea. Each vessel is said to require $7 million to $11 million in maintenance costs a year, excluding personnel expenses.

Nations use hospital ships in different ways. China and Russia have dedicated hospital ships while the U.K. and France use warships to serve such functions.

Japan invited the Mercy to the Port of Tokyo in 2018 to absorb American know-how. Japanese officials reportedly were surprised to see cutting-edge medical equipment on the vessel, including the da Vinci robotic surgical system. Eto said Japan “should consider installing the latest technologies, such as surgical robots and robots that transport objects in hallways” for its hospital ships.

Shipbuilders cannot expect to receive orders for many hospital ships, unlike commercial vessels such as bulk carriers and container ships. Yet Japanese manufacturers have hopes for such ships because of the unprecedented difficulties they have faced since before the coronavirus pandemic.

Japan’s shipbuilders are up against stiff competition from huge shipbuilders in China and South Korea created through mergers. South Korea’s government has provided more than $9 billion in financial aid to its domestic shipbuilding industry, a situation that Yukito Higaki, president of Japan’s Imabari Shipbuilding, has called “unfair.” Japanese shipbuilders have been embroiled in fierce price competition as a result.

Japanese players had 17.4 million tons of outstanding orders for ships intended for export as of the end of March, which is close to a two-decade low. That, coupled with the coronavirus pandemic canceling international trade shows for shipbuilders, have left shipbuilders in dire straits. In recent months, Japanese shipbuilders have been unable to even hold talks with potential customers in Europe and elsewhere.

A sense of crisis has spurred industry consolidation, with Imabari and Japan Marine United — Japan’s top two shipbuilders — announcing a capital and business partnership in late March. There is even talk of all major Japanese companies joining hands to compete on a better footing against Chinese and South Korean rivals.

However, building complex vessels such as hospital ships carries risks. Back in 2011, Mitsubishi Heavy Industries received a roughly 100 billion yen order to build two luxury cruise ships for Aida Cruises, a subsidiary of global cruise operator leader Carnival. But it was saddled with losses totaling 270 billion yen due to difficulties working on ships with such intricate designs.

Hospital ships are expected to require extensive rigging for medical equipment. “We need to carefully determine whether a project will be profitable, since the design will change substantially depending on the ship’s functions,” said a top official at a major Japanese shipbuilder.

The fact that the companies are nonetheless placing their hopes on hospital ships shows just how dire the situation is for Japan’s shipbuilders.