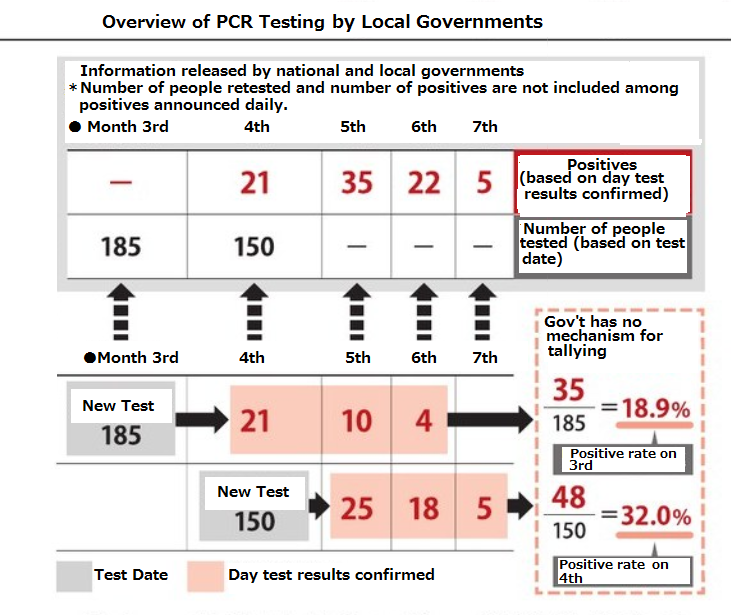 TOKYO — The Japanese government is struggling to obtain accurate data on the ratio of people testing positive for the novel coronavirus via polymerase chain reaction (PCR) tests compared to the number of examinations being conducted.

Numerous institutions across Japan conduct PCR tests, and their results come back at different times on separate days. There is no existing system that determines nationwide figures for conducted tests and those who tested positive, which are necessary for calculating positive rates for the coronavirus.

PCR test administrators can be generally classified into three categories — national institutions, including the National Institute of Infectious Diseases and the Health or the Labor and Welfare Ministry’s quarantine stations; regional institutions such as public health centers; and private institutions including companies, universities, and medical facilities.

According to the health ministry, positive test result data is usually aggregated each day when the results become available. Institutions report the daily number of positive results to designated public health centers, which relay the information to prefectures and ordinance-designated or major cities. Local governments then announce the number of positive cases that day.

By compiling data from the submissions and announcements made by local governments, the ministry issues a report every evening, revealing figures for the total number of people who have tested positive in each prefecture the day before.

The ministry also asks prefectures to submit data on the number of tests conducted in a day. However, a total of 12 prefectures have not responded to the requests, so the ministry obtains information from published documents on their websites.

Under these circumstances, the health ministry only has provisional data based on cumulative figures of the total PCR tests conducted and the total of those who tested positive. There are cases where old information from two to four days earlier is used, and the ministry is currently unable to disclose the rate of people testing positive each day.

The main issue is that there is a time lag between undergoing the PCR test and getting the results. For example, if a group of people took the PCR test on May 3, positive test result data gathered on May 4 may include some results obtained from the tests on May 3, but not necessarily all of them. This is because not all the test results may be ready in time for data collection the following day.

Another complication is that the same person can take the test multiple times, including for a check-up test before being discharged from a hospital. There is a discrepancy in figures between the number of “tested cases,” which is reported directly to the ministry from the test administrators, and the number of “tested people,” which the ministry calculates using data from prefectures.

The central government and local bodies must work better together to resolve these issues and set a uniform standard, but the medical field is already under heavy strain in fighting the coronavirus.

Shigeru Omi, vice chair of the Japanese government’s expert panel on coronavirus measures, commented in a press conference on May 1, “We can grasp the situation better if accurate figures on the number of people who underwent tests are shown. We are asking for the government’s cooperation in overcoming this core issue.”