The following article was contributed by Hitotsubashi University Professor Hiroshi Ota (comparative and international education), who has taught at both Japanese and American universities.

The coronavirus outbreak has drastically changed the situation surrounding universities. In particular, it has impacted their international exchange programs.

Many international students who were scheduled to enroll in Japanese universities starting in April have been unable to come to Japan, and many continuing international students who had returned to their home countries for spring break cannot come back. Most Japanese students studying abroad have returned to Japan, and plans to study abroad have been suspended.

Japanese universities have focused on efforts to become more international in response to rapid globalization. International exchange programs (both the enrollment of foreign students and study abroad by Japanese students) have expanded considerably, partly due to a major boost from the Japanese government. 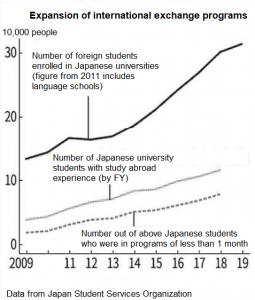 A recently released survey by Japan Student Services Organization (JASSO) found that there were over 310,000 foreign students studying in Japan as of May 2019. In the 2018 academic year, there were over 115,000 Japanese students who had studied abroad during their university years (66% of whom participated in programs of less than one month).

In Europe, the Erasmus+ program to promote student exchange within the European Union (EU) has energized student exchange. A similar intra-regional exchange program rapidly developed in the Association of Southeast Asian Nations (ASEAN) countries. English-speaking countries such as the U.S. and Australia have enrolled international students and encouraged students in their countries to study abroad. There is a great variety of international education programs around the world, ranging from ultra short-term exchange programs of several weeks to long-term study aimed at obtaining a degree, language courses, and international internships.

Ironically, the globalization of society also led to the worldwide spread of the virus in a short period of time, resulting in the suspension of international exchange programs. Many universities in English-speaking countries such as Australia rely on a business model of charging high tuition for international undergraduates and operating affiliated English-language schools that admit a large number of international students for short-term language courses. These universities are now suffering from decreased revenue. International exchange programs have been reset worldwide, and are searching for ways to function in the post-COVID world.

Even before the coronavirus outbreak, there had been discussions in the U.S. and Europe about getting rid of the all-too-common ultra short-term programs out of consideration for the high cost of international travel and its environmental impact (due to the carbon dioxide emitted by airplanes). Frequent travel for academic or international conferences and academic exchange had also been viewed as problematic.

Proponents of these ideas argue that long-distance travel for the purpose of face-to-face meetings or educational programs should not be taken for granted. Instead, they say, virtual and online exchange and conferences using information and communications technology (ICT) should take precedence.

The proponents also argue that universities can “globalize internally” through the enrollment of a more diverse student body, expansion of English language education, and increased interactions with local immigrant or refugee populations. Such efforts should enable universities to provide low-cost international education programs that are environmentally friendly and involve more students.

The persuasive power of such arguments has grown with the coronavirus outbreak. Short-term study abroad programs for which overseas travel appears to be the goal will have to be reconsidered. The current climate in which universities compete in terms of the number of international students enrolled will be admonished. The meaning of studying abroad will be reexamined, and exchange programs will need to be reformulated.

For example, even a study abroad program of a few weeks could be combined effectively with joint online courses with foreign universities before and after the study abroad period. An online community of students from several countries could be created. Such initiatives to increase educational output, using remote methods to operate ongoing international education programs, will be promoted. An approach called Collaborative Online International Learning, or COIL, is expanding in several countries including Japan. The expansion of COIL is expected to accelerate in the future.

Japanese universities are now under pressure to transition to remote classes. There are two common formats for remote classes. In the synchronous approach, classes are transmitted live and students access the livestream simultaneously. In the asynchronous approach, students access prerecorded videos individually. Many methods and tools are available. Because courses have to be reorganized to be made available online, making the transition in a short period of time is not easy.

Some European and American universities have experience offering online classes and MOOCs (massive open online courses) for the general public. Some universities managed to transition to remote education in about one week.

Japanese universities have not traditionally enrolled many older students and lag behind in providing a diverse learning environment using ICT. In remote education, Japan is at least 20 years behind the U.S., U.K., and Australia.

To regard the transition to remote education as temporary and try to return to a pre-coronavirus situation would be to stop progress. The “new normal” requires a completely different approach.

To realize this goal, personnel who have specialized skills and knowledge in ICT and international education are needed. However, Japanese university personnel are basically generalists. Not only universities, but also the national government and society as a whole are facing a similar situation. Language and ICT skills are essential for faculty and students.

Specialists played active roles in the measures to deal with the coronavirus in Taiwan and Germany, both of which were highly praised for their handling of the virus. In comparison, the limits of Japanese hiring practices and the lack of attention paid to specialization is obvious. The global spread of the outbreak has revealed preexisting problems. How a country responds to the new coronavirus will determine how its calibre and appeal are assessed in post-COVID times. This naturally includes higher education.