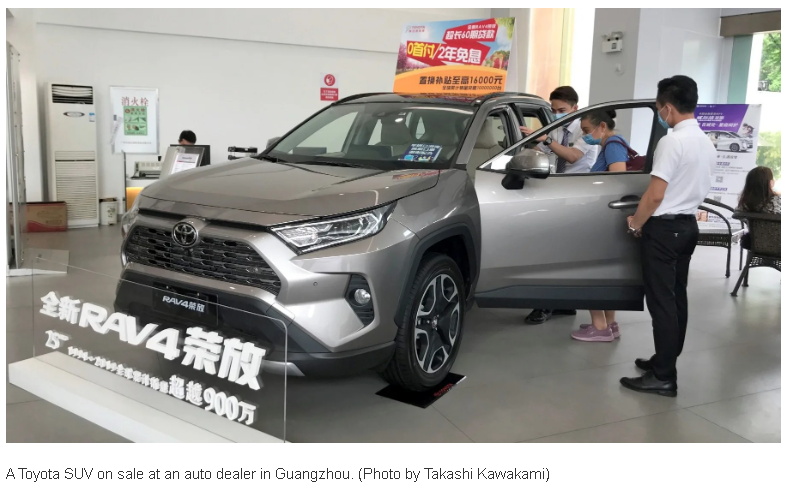 GUANGZHOU — Toyota Motor and Mazda Motor both recorded rises in auto sales in China in April, their first monthly increases since the novel coronavirus broke out in January in an indication of the possible return of consumer demand.

Toyota announced on Friday that it sold 142,900 vehicles in April in the country, increasing 0.2% from the same month last year, driven by purchases of major brands such as the Corolla and Levin.

“There are more people going out and spending money as the novel coronavirus issue has calmed down,” said an employee at a dealer selling Toyotas in Guangdong Province. “The idea that private cars lead to lower infection risks compared to public transport also contributed to new car demand.”

Mazda’s sales in the country also rose, increasing 1% in April year on year to 17,091 vehicles.

According to a local automotive industry association, overall car sales in China in April also increased for the first time in about two years.

And while some suggest that demand is coming back, uncertainties remain.

Some observers see April’s sales increase as merely reflecting pent-up demand from consumers who could not buy new cars between January and March during China’s coronavirus lockdown.

Honda Motor, meanwhile, announced on Friday that its April sales declined 9.5% from the same month last year to 113,430 vehicles. The decline was mild compared to the 85.1% plunge in February and the 50.8% drop in March. Honda had halted production at its key factory in Hubei Province until the middle of March. Its factory and dealers had returned to normal operations by the end of April.