TOKYO — As Shionogi & Co. races to bring a possible coronavirus vaccine to the market next year, the Japanese drug manufacturer is considering plans to expand production capabilities before clinical trials start.

“While keeping pace with rivals, I expect a release date by around fall 2021 at the latest,” Shionogi President and CEO Isao Teshirogi told Nikkei in an interview.

Shionogi aims to supply 10 million doses of the potential vaccine. The company looks to invest 10 billion yen to 20 billion yen ($94.1 million to $188 million) to proceed with expanding capacity, an unusual gamble in hopes of ensuring a swift mass release.

Teshirogi acknowledged that drugmakers usually wait for trial results before moving to scale up.

“In view of the situation, we’ve decided to take the risk to plan for mass production in parallel with development,” he said.

Subsidiary UMN Pharma is developing the potential vaccine jointly with Japan’s National Institute of Infectious Diseases. The two aim to begin clinical trials later this year. The vaccine would be made by injecting a genetically re-engineered virus into insects.

But UMN has the capacity to produce only a few million doses. Shionogi’s investment will go toward installing production equipment in factory space borrowed from other companies. No new plants will be built, Teshirogi said, since such an undertaking would require three years. 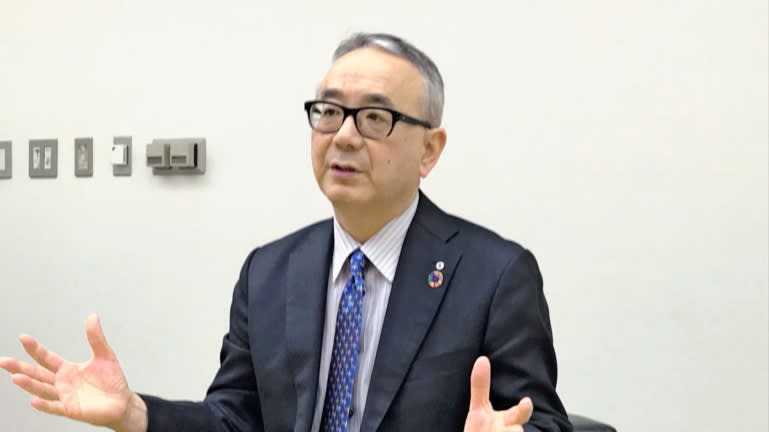 Shionogi President Isao Teshirogi is investing in greater capacity, hoping to supply a coronavirus vaccine immediately upon its approval. (Photo by Tatsuro Miyazumi)

Teshirogi intends for his company to hit the ground running if Japan’s health ministry certifies the vaccine candidate.

“In order to immediately supply a large volume upon gaining approval, we need to be capable of mass production even if it means taking a risk,” he said.

With various drugmakers looking to release a vaccine next year, Teshirogi said, “how to secure a supply chain will be an exceptionally large challenge.”

To maintain a steady supply of its eventual vaccine, Shionogi plans to locate production exclusively in Japan and source all raw materials domestically.

Shionogi, known to specialize in treatments for infectious diseases, has made COVID-19 its highest priority. The company also has partnered with Hokkaido University on research into a treatment for the disease.

“With the ongoing disturbance of economic activity, it has become a matter of urgency to provide a vaccine as quickly as possible to resolve uncertainty,” Teshirogi said.