Yukio Okamoto, the hand that cradled the Japan-US alliance 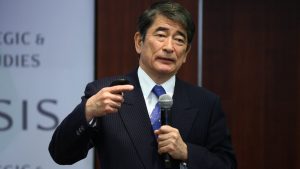 TOKYO — Back when Yukio Okamoto was a diplomat, his suit jacket was always draped over the back of his chair at the Ministry of Foreign Affairs in Tokyo. As director of the First North America Division, he kept a direct line with the U.S. State Department.

But visitors, reporters and superiors learned over time that they were fooled. No, he was not in the building. Instead, he was either walking the halls of the lawmakers’ office building, or even thousands of kilometers away in Washington.

And it was best not to ask his bosses where Okamoto was. Nobody ever knew what he was up to, and inquiring would only embarrass the ministry’s top echelon.

This is one of the many tales of Okamoto that are still talked about today, 29 years after he abruptly left the foreign ministry. Okamoto died last month after contracting the novel coronavirus.

For young bureaucrats these days, moving to the private sector is not a particularly uncomfortable transition. But when Okamoto left the Foreign Ministry in 1991, it sent a shock wave through Kasumigaseki, the central Tokyo district where Japan’s powerful ministries are located.

Here was one of the best and brightest, in his mid-40s, leaving Japan’s bureaucracy — unrivaled in its ironclad unity and hailed as the “world’s largest collective brain” — to form his own company?

Okamoto’s parting gift to the ministry was the re-framing of the Japan-U.S. relationship as a “global partnership” by U.S. President George H.W. Bush and Japanese Prime Minister Toshiki Kaifu in the spring of 1991.

By the latter half of the 1980s, the U.S.-Japan security relationship had reached an important crossroads. Fueled by an asset-price bubble, cash-rich Japanese companies vied to make trophy investments in the U.S. The rise of Japan was viewed as a threat and Japan-bashing became rampant in Washington and across America.

In Japan, the thinking was there was nothing left to learn from the U.S. Economic success had bred arrogance, and with it, a notion that perhaps Japan can be self-reliant.

Prime Minister Shigeru Yoshida’s postwar doctrine of entrusting Japan’s defense to the U.S. until the Japanese economy revived had become a policy that many in Japan took for granted.

In the U.S., which was suffering an economic downturn, there was widespread dissatisfaction with the American commitment to protect affluent Japan. Then the Cold War came to an end, further adding fuel to the argument.

But the idea of a global partnership changed the relationship. It meant the bilateral alliance was not only for the peace and stability of Japan and Northeast Asia. For Washington and Tokyo, which both value freedom and democracy, the new paradigm expanded their security ties to international problems, such as regional conflicts, famine in developing countries and protection of human rights.

Those stated goals were not a lie, but neither were they the true aim of the global partnership. Always a strategist, Okamoto’s top priority was preserving the Japan-U.S. alliance and keeping the U.S. forces in Japan. He was watching the fast rise of other Asian countries, China in particular.

The slow, deliberate pace of policy making in Japan’s bureaucracy was frustrating to Okamoto. Those cautious practices were established over years of experience, taking time to search for flawless theoretical arguments that would not be shot down by politicians or other ministries.

Okamoto refused to be bound by that framework.

“I might as well pull a cart and start selling fish,” the sea-loving Okamoto told colleagues, and just like that he quit.

He confounded everyone when he, along with some friends, established his consulting firm Okamoto Associates.

His model was Armitage Associates, a consultancy set up by former U.S. Assistant Defense Secretary Richard Armitage, a close friend of Okamoto’s from his time in Washington. The office was the quintessential Washington firm, employing a team of consultants and backed by Armitage’s connections with lawmakers, high-ranking government officials and major corporate leaders.

Then-Japanese Prime Minister Ryutaro Hashimoto and U.S. Ambassador Walter Mondale announce the return of the Futenma air base in Okinawa at the prime minister’s office on April 12, 1996.

The firm would have influence over voting in Congress and over government appointments in Republican administrations. When his close friend Colin Powell became secretary of state, Armitage himself followed him into government, serving as Powell’s deputy secretary.

But that type of high-powered consultancy was unheard of in Japan, so Okamoto had to start from scratch. He pitched his plans to business leaders so that they would be sponsors. To sustain the business, Okamoto Associates spread its wings to various areas, including serving as a go-between connecting U.S. venture capital firms with unique Japanese entrepreneurs.

The ex-diplomat taught enthusiastically at universities, inviting students to home parties where he would enlighten them with his deep knowledge of history. He was passionate about nurturing a younger generation of talented individuals.

Eventually, Tokyo came calling. Okamoto was tapped to serve in multiple Japanese governments, either in an official or an unofficial capacity. He took charge of Okinawa affairs under Prime Minister Ryutaro Hashimoto in 1996 as the first person to hold a special adviser post established in Japanese law. When the Iraq War broke out in 2003, Prime Minister Junichiro Koizumi asked Okamoto to handle Iraq issues.

Both were critical junctures for the alliance with the U.S. He took the former position when the fate of U.S. forces in Okinawa — in particular the controversial Futenma Air Base — became the burning question.

The latter responsibility came when deploying Japan’s Self-Defense Forces to Iraq was a sharply divided issue due to its constitutional restraints. Building on the trauma of the first Gulf War, when Japan contributed $13 billion to the operations but was not thanked by Kuwait because it had not sent boots on the ground, the government — as was Okamoto — was determined to make visible contributions by sending the SDF this time.

When he was a bureaucrat, he would be involved in policy making as part of a team in the foreign ministry. But by this time, Okamoto had established a wide network of connections in the private sector, in academia and in the media, both domestic and global, which he used to influence the discussion. And at the request of the prime minister’s office, he was steering policy. The very goals he set out to achieve when leaving bureaucracy were becoming reality.

But even so, in his later years, Okamoto’s words and actions betrayed a sense of melancholy. While neighboring countries were booming in terms of economy and military buildup, Japan was shrinking, saddled by a declining birthrate and aging population.

Japan’s number one deterrence is the presence of the U.S. forces in the country. But one wonders how the U.S. will look upon Japan as it continues to become smaller.

Faced with the biggest danger to national security since the end of World War II, are the Japanese people truly aware of what is happening?

The world will become even more unpredictable after the coronavirus pandemic, and the fact that Okamoto lost his life to COVID-19 is symbolic of the unease he felt about the new world.

Born and raised on the Shonan coast southwest of Yokohama, Okamoto had a lifelong love of the sea. Even in the busiest of times he sailed around, stopping at various places to dive. Sometimes he would use photos of these outings to make mousepads, which he gave to friends as gifts. Each of these beautiful photos gives proof of a life lived to the fullest.