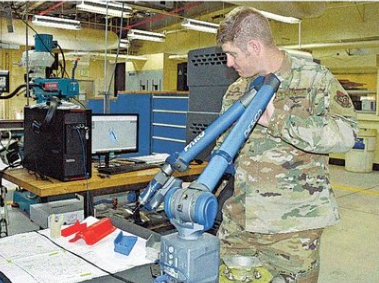 The U.S. Air Force and the U.S. Marine Corps in Japan are accelerating the practical use of 3D printers to manufacture parts for fighters and other defense equipment. As China increases its missile capability, this apparently aims to raise the parts supply capability on the spot without relying on parts procurement from the U.S. However, as U.S. military airplanes are frequently involved in mishaps in Okinawa Prefecture, some citizens have voiced concerns about safety.

A 3D printer is a device that manufactures a solid body by piling up resin and other materials based on three dimensional data. This enables users to make things in a short time. It also makes possible both production in small quantities and a significant cost reduction. Blueprints can be saved as data, which makes reproduction easy.

The 18th Wing that operates the USAF Kadena base, the largest U.S. Air Force base in the Far East, introduced 3D printers in 2018. The base first makes a full-scale model of an F-15’s parts with a 3D printer and checks whether the model fits the airframe. Then the base manufactures a real metal part based on the model with a special machine. The Kadena base is known as the deterrent base of the U.S. forces in Okinawa. “The base is located at very strategic point, but it is sometimes difficult to obtain parts from the U.S.,” said a Wing official. “With 3D technology, we can procure necessary parts with speed and efficiency.”

The 3rd Marine Expeditionary Force headquartered in Okinawa started using 3D printers from 2015. In April 2018, when a plastic bumper of a state-of-the-art F-35 stealth fighter was broken on an assault landing ship during training in the Pacific Ocean, the 31st Marine Expeditionary Unit, a quick response force, made a replacement bumper with a 3D printer. As the unit made the bumper on its own, it saved about $60,000 (about 6.4 million yen), sources said.

“We share knowledge (on 3D technology) with the U.S. Navy to make parts,” said a Marine Corps official. The technology is also applied to making parts for small-size drones and rifles, according to the official who also explained that the technology is useful for providing parts to allies. (Abridged)