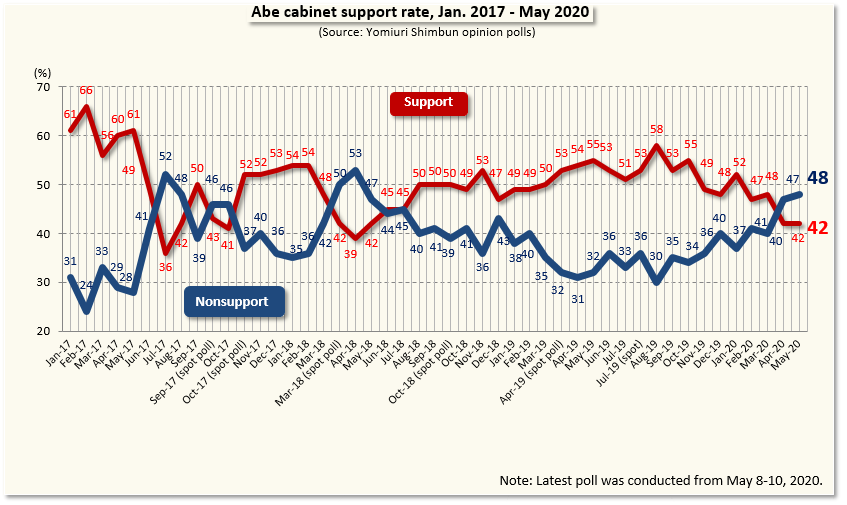 A nationwide survey by The Yomiuri Shimbun found 58% of respondents do not support the Japanese government’s response to the new coronavirus, up 19 percentage points from 39% in the survey conducted from March 20 to 22, when the same question was asked.

About 34% said they approved of the government’s response, down from 53% in the March survey. On the relief payments of ¥100,000 in cash per person, 60% said it was appropriate, while 24% think the amount is too little, and 4% said it is too much.

The survey was conducted from Friday to Sunday by telephone. The 1,132 respondents of voting age comprise 558 fixed-line phone users from 850 households confirmed to have at least one voter and 574 out of 1,193 cell phone users who answered their phone.

The approval rating for the Abe Cabinet was 42%, unchanged from the previous survey on April 11 and 12. The disapproval rating was 48%, slightly up from 47% in the previous survey. When asked why they did not support the Cabinet, the top reason was “I don’t trust the prime minister” at 34%, down from 52% in the March survey, followed by “I can’t expect anything from the government policy” at 26%, up from 18% in the March survey, and “The prime minister lacks leadership” at 22%, up from 7%.

This result was apparently due to confusion over how to revise the supplementary budget, which was once approved by the Cabinet, to cover cash benefits to the public.

As for the extension of the emergency declaration to the end of this month, 81% of respondents supported the government decision. As for the lifting of restriction measures for residents and resuming business activities in areas where the spread of the virus is not serious, 57% said it is appropriate, while 30% said such a relaxation is too early and 5% said it was too late.

Financial support provided by local governments to businesses that accepted requests for suspending operations was seen as insufficient by 60%, while 27 % said it was appropriate and only 1% said it was too much.

Among major political parties, the ruling Liberal Democratic Party was supported by 34%, followed by the Constitutional Democratic Party of Japan, Komeito and Nippon Ishin no Kai (Japan Innovation Party) with 4% each, and 44% of respondents did not support any particular party.