Japan business sentiment at lowest since 2002 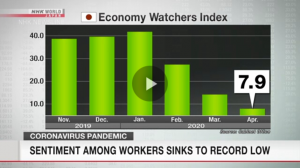 A Japanese government survey shows that business sentiment among workers dropped to its lowest level for two consecutive months amid the coronavirus pandemic.

The Cabinet Office on Wednesday released the results of the monthly Economy Watchers Survey. It questioned more than 2,000 workers, including shop clerks and taxi drivers, about how they feel about the economy.

An index reading above 50 generally indicates optimism, while a figure below 50 indicates pessimism.

The April index about the current state of the economy dropped to a low of 7.9, down 6.3 points from the previous month.

It recorded the lowest figure for the second month in a row since January 2002 when comparable data became available.

Business sentiment worsened, particularly in eating and drinking services, where more establishments were forced to temporarily close. Other services, including hotels, also suffered from reservation cancellations due to restraints on trips.

A restaurant worker in Chugoku region, western Japan, said there were almost no customers.

A clothing store worker in the region around Tokyo said the store has to consider whether it should terminate business or go bankrupt.

A department store worker in northeastern Japan, or Tohoku region, said it has lost most of its business since temporarily shutting down.

An index gauging the economic outlook also dropped to an all-time low of 16.6, down 2.2 points from the previous month.