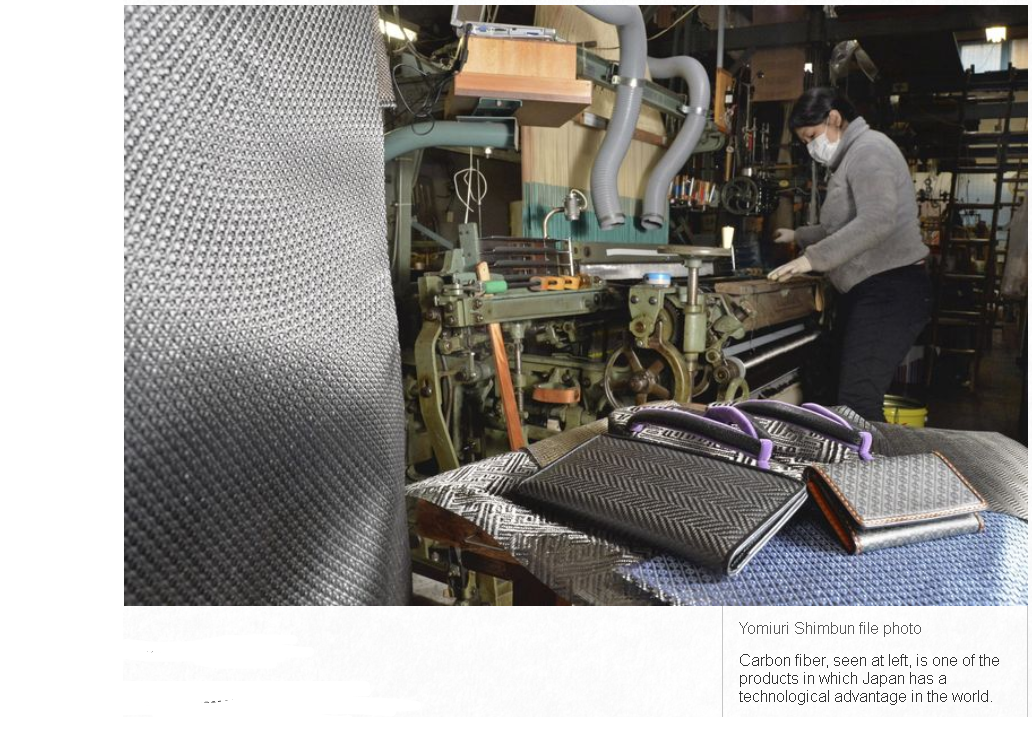 A Chinese-language report titled “A list of core technologies not acquired by China” was brought to the Japanese government around early 2019.

Said to have been compiled by a person, who works with a major Chinese investment fund, the list enumerates 63 industrial technologies not possessed by China, and the names of foreign companies and research institutes, including some in Japan, that possess them. They included the following:

Reflecting on the reaction to the list, a high-ranking Japanese government source said: “China has made a thorough survey of foreign cutting-edge technology to be acquired in line with its ‘Made in China 2025’ strategy. It’s a list of targeted technologies.”

“Made in China 2025” is a high-tech strategy announced by the Chinese government in 2015. Aimed at turning China into a “manufacturing power” by 2025, the strategy lists next-generation information technology, robotics and new materials as 10 priority fields for realizing domestic production.

Doshisha University Prof. Yuzo Murayama, who is knowledgeable about engineering management, warned about China’s moves. “It won’t be surprising if the listed Japanese firms become targets at anytime,” Murayama said.

The first methods that come to mind for technical acquisition are corporate acquisitions, business tie-ups and the headhunting of engineers.

Yangtze Memory Technologies Co. (YMTC), a major Chinese semiconductor maker headquartered in the city of Wuhan, Hubei Province, where the new coronavirus infection broke out, announced on April 13 that it had successfully developed world-class high-spec flash memory. The announcement came only five days after the lockdown of Wuhan City was lifted.

YMTC is a subsidiary of IT giant Tsinghua Unigroup, whose parent organization is Tsinghua University, the alma mater of President Xi Jinping. YMTC was founded as recently as in 2016.

Tsinghua Unigroup is said to have grown rapidly due to such methods as the acquisition of U.S. firms and headhunting a group of Taiwan engineers and executives of Japanese semiconductor companies. Unigroup tried in vain to acquire Toshiba Memory Corp. (currently Kioxia Corp.) of Japan and Micron Technology, Inc. of the United States. It receives financial support from the Chinese government.

Chaired by the Treasury secretary, the CFIUS consists of officials from an intelligence section of the Director of National Intelligence in addition to those from the departments of defense, state and commerce. By making full use of background information regarding the Chinese military, the United States has thoroughly implemented measures to exclude risky Chinese firms.

In the case of Japan, however, foreign capital participation bids are scrutinized based on laws that differ according to the type of industry. With a mobile phone company, for example, applications are screened in line with the Telecommunications Business Law.

By at long last revising the Foreign Exchange and Foreign Trade Law, which regulates foreign firms’ capital investment in and acquisition of Japanese firms, Japan has expanded the scope of surveillance on foreign ownership. Under the revised law, foreign investors buying a stake of 1% or more in Japanese firms face pre-screening, compared with the previous threshold of 10%.

However, compared with U.S. regulations that give the CFIUS strong power to punish violating companies regardless of the type of industry and retrospectively, Japanese law only allows orders to sell shareholdings to be issued ex post facto in certain designated industries.

After the spread of the novel coronavirus, it was discovered that the manufacture of curative drugs and artificial respirators had not been included in the designated industries. The government is hurriedly examining stricter regulations, but there is no denying that this is a makeshift response. A former administrative vice minister of a government office in charge of economic matters lamented that “Japan has almost no ‘weapons’ with which it can counter China’s expansion of its technical supremacy.”

Some are calling for legal arrangements that would allow Japan to take comprehensive measures to ensure economic security, as is done by the United States.

But unlike the United States, which is far from China geographically, there is less atmosphere in Japan to permit an economic war with Japan.

The Prime Minister’s Office and the National Security Secretariat also take a cautious stance, saying that drafting a law on the premise of targeting specific country would excessively provoke China.

The National Security Secretariat’s economic department, which was inaugurated in April, is being tested as to whether it can strike a balance between promoting economic activities with China and maintaining technological supremacy over the country.