Only option is Japan-China conciliation, author of ‘New Thinking’ says 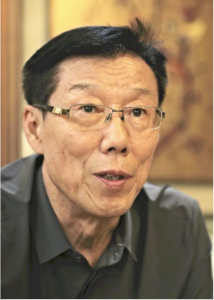 Ma Licheng, a former commentator for the People’s Daily newspaper in China, has advocated conciliation between Japan and China since he released an essay titled “A New Mode of Thinking on China’s Relations with Japan” in 2002. Ma has had a significant influence on bilateral relations, and this month he announced another essay, which is the final edition of his New Thinking on Relations with Japan.

The Yomiuri Shimbun interviewed Ma via email about topics including his current feelings and relations between Japan and China, which have been directly affected by the spread of the new coronavirus.

The following are excerpts from the interview.

The Yomiuri Shimbun: How do you feel about completing your New Thinking essay?

Ma: During this 18-year period, China-Japan relations can be described as a repetition of two steps forward, one step back due to reasons including their history, territory and [political] systems. There was even a total retreat.

I was under fierce attack as a traitor by internet users [who regard “anti-Japan” as justice]. Many people lost confidence [in conciliation].

But I was not swayed by that. As time has gone by, the number of people who promote conciliation has been increasing and much of what I advocated in New Thinking has been realized. There is no option but conciliation in terms of China-Japan relations. The people of the two countries would not be able to accept the consequences brought about by a breakup of the relationship. Politicians in both nations must respect public opinion.

Q: What results have been produced by New Thinking?

A: New Thinking is the reflection of the most important voices from the private sector in China after the normalization of China-Japan diplomatic relations [in 1972]. According to Zhu Liang, former head of the Chinese Communist Party’s International Liaison Department, when former Chinese Premier Wen Jiabao visited Japan in 2007 and President Hu Jintao did so in 2008, they each made a speech that referred to New Thinking. New Thinking was supported in Japan as well.

Q: But there is currently strong distrust in Japan toward the Chinese political system, regarding its initial response to the coronavirus.

A: The Chinese leadership repeatedly says that lessons should be summarized. When the virus began to spread in Wuhan [in Hubei Province], some officials concerned did not attach importance to the infections, and covered up information and even suppressed warnings issued by doctors. These things indicate systemic problems. On the other hand, China’s lockdown of cities, which produced good results, was a good example for other countries.

Q: New Thinking has emphasized the important role played by Chinese visitors to Japan in helping Japan-China conciliation, but in Japan optimism on this point has been fading away.

A: Tourism between the two countries will improve in the future. Even if the virus disappears, tourism won’t. From May 1 to 3 [when China had consecutive holidays], the number of domestic tourists in China reached a total of 85 million, even though restrictions were still imposed. Chinese people, who have strong energy and ample funds, are waiting for Japan to lift the entry ban. Many of the middle class strongly regard Japan as their first tourist destination.

Q: The pandemic has caused hatred and division in various areas, such as between nations and races.

A: The world will never return to isolationism. Globalism has advanced in the modern era even through wars and contagion. But in the short term, each country needs to restrain nationalism in order to avoid a war.