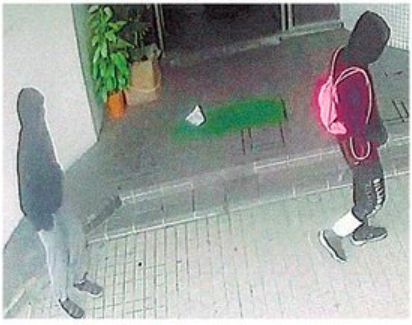 The two men as captured in security camera footage near the site of the robbery. (Footage taken at 3:47 p.m. on May 12; courtesy of Chatan Town)

CHUBU – In relation to the robbery of a currency exchange shop in Chatan Town, it was learned on May 14 that two men wearing black parkas with the hoods up have been confirmed on footage taken by security cameras near the scene of the incident.

On May 12, two foreign-looking men entered a currency exchange shop in Chatan Town, threatened the attendants with a knife, took U.S. dollars, and fled.

The footage shows that one of the men wore a pink knapsack on his back. The videotape also shows the pair walking around the area from about 10 minutes before the incident and then heading toward the exchange shop, which was the scene of the incident.

Footage has been confirmed to show the two fleeing using the back door of the shop and then running toward the seashore at around 3:57 p.m., which is thought to be right after the incident.

A 21-year-old man who saw the pair right before the incident described the scene at the time: “The two appeared to be wearing face guards and were entirely covered except for their eyes. I thought it was strange. They were about 170 to 180 cm tall. They appeared relaxed, not agitated at all.”

According to the Okinawa Police, the cash that the two foreign-looking men stole totaled 6.9 million yen and included U.S. dollars. The breakdown of the cash was as follows: about 2 million Japanese yen and approximately 46,000 U.S. dollars (equivalent to about 4.9 million Japanese yen). The two men are currently at large. Police continue to investigate the incident.