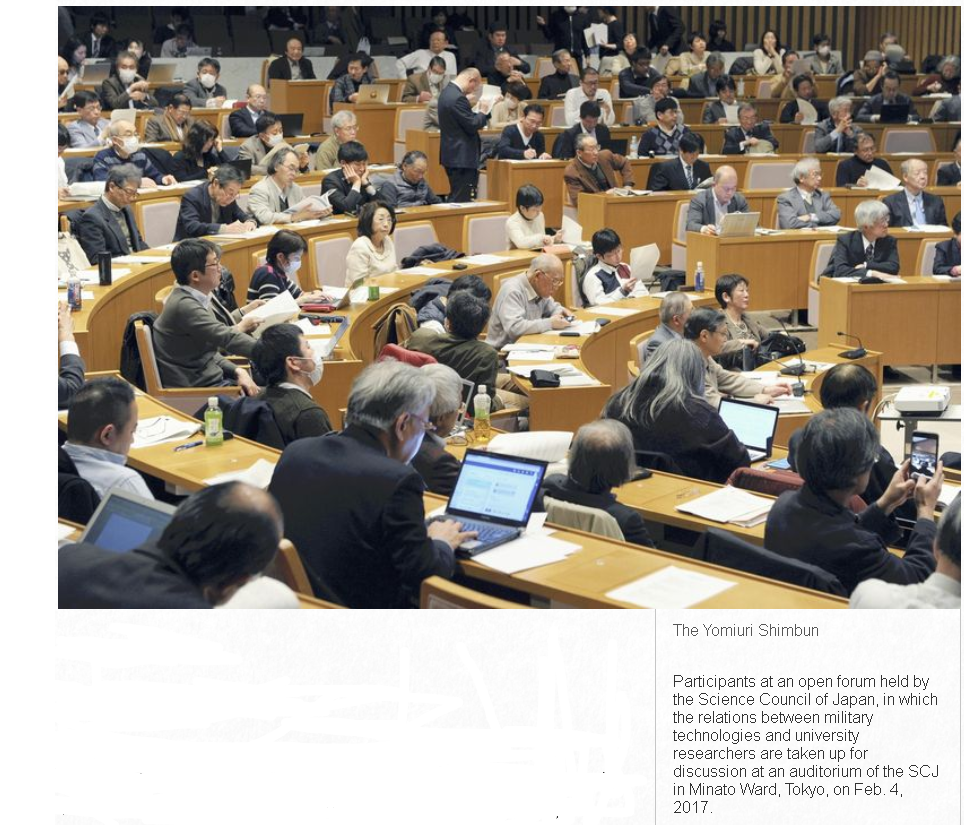 Having reflected on the fact that Japanese private corporations and researchers were involved in war during the World War II, there runs a strong spirit of considering as taboo their engagement in research and development in the field of national security.

In the academic circles in our country, the Science Council of Japan (SCJ), a representative organization of the Japanese scientist community, stands in the forefront to oppose the involvement in military affairs.

In opposing the security technology research promotion system, which the Acquisition, Technology and Logistics Agency (ATLA) started in fiscal 2015, the SCJ drew up a statement asking universities to take such actions as conducting in-house screening on the appropriateness of their researches in March 2017.

“In recent years, relations between science and technology [of universities and academic circles] and military researches are becoming closer once again.

“Along with a definite objective of having science and technology [owned by universities and academic circles] linked to the future development of [defense] equipment, the invitation of applications from the public and their screening have been conducted … The government’s intervention in researches is conspicuous, and there are lots of problems involved,” the statement said.

The SCJ also emphasized that it will “carry on” the spirit of its 1950 statement which said, “We will never comply, in the future, with any scientific researches designed for the purpose of war,” and the 1967 statement which said, “We will not conduct any scientific researches for military purposes.” At an open forum that the SCJ held before it decided on the latest statement, a prevailing view among participants had it that they would call for academic circles not to take part in the agency’s system.

The system of ATLA is aimed at supporting those basic researches that are expected to be possibly made use of in the defense field in the future. Up to ¥2 billion is subsidized to each research. The agency explains that “We will not intervene in these researches, and will not restrict the public disclosure of the fruits of such researches.”

The number of applications made by universities and higher technical colleges, excluding private corporations and public research institutions, stood at 58 in fiscal 2015. But in fiscal 2016 when the SCJ began considering the agency’s system problematic, the number dropped to 23. In fiscal 2019, it was only nine.

Hokkaido University, which had received the subsidy from the agency since fiscal 2016, declined the subsidy in fiscal 2018, on the pretext of respecting the SCJ’s statement. Kyoto University and Nagoya University have also adopted a basic policy of not conducting any military researches, urging their researchers to restrain themselves.

One of the factors why the SCJ’s statement can wield such an enormous power is that the SCJ has a clout in the allocation of the government’s budget for research and development, which totals about ¥4 trillion.

The SCJ is a special organization under the jurisdiction of the Cabinet Office and is expected to serve such roles as making policy proposals to the government.

While the Education, Culture, Sports, Science and Technology Ministry will make a decision on how the R&D expenditures should be allocated, the SCJ recommends to the government that it should promote the key, large-scale research plan worked out by the SCJ on the basis of a master plan it compiles every three years.

A professor at a national university said: “Once falling under the displeasure of the SCJ, there is a possibility of a university being at a disadvantage in winning projects and posts in the future. When the SCJ issues a statement, universities and academic circles would be dispirited or try to read what the SCJ is implying.”

In the past, it was the most common innovation flow that the advanced technologies in military researches led by the central government would make a “spin-off,” having a ripple effect on commercial applications of the private sector. But now, as exemplified by artificial intelligence (AI) and information communication technology, the flows have shifted into a “spin-on,” through which commercial technologies developed by the private sector would be taken in by the defense sector, with the “dual use” of military and commercial technologies advancing.

China is even promoting the “Military-Civil Fusion” as a national strategy to make use of leading-edge civilian technologies for military purposes.

A senior official at the Defense Ministry said, “As long as the private-sector technologies cannot be utilized, Japan’s own development of defense capacity would fall behind.”

Still, there are signs of movements to reconsider an excessive “allergy to military affairs.”

The University of Tsukuba, which had worked out a basic policy that it “will not conduct any military researches as they run counter to humanity,” had its research on materials accepted by the security technology research promotion system of ATLA. The research is aimed at creating next-generation, shock-resistant materials, by utilizing the cutting-edge materials of carbon nanotubes.

At a press conference on March 26, Kyosuke Nagata, president of the university who is also the president of the Japan Association of National Universities, explained why his university approved the application of its research for the research promotion system of ATLA. By taking, as an example, the possibility that vaccine researches designed to fight such viruses as the new coronavirus may be diverted into biochemical weapons, he said that “It is difficult to draw a line in the dual use [of military and commercial technologies].” He then added, “I think those researches to be conducted for [the nation’s] self-defense are right and reasonable, regardless of which ministry is involved in [the research].”

Even from among researchers, criticism has been raised against the statement made by the SCJ. Tomonori Totani, a professor at the University of Tokyo and a scholar on astronomy, pointed out in his treatise titled “Criticism on the SCJ’s statement” published in December 2018 that “Asking everyone to comply with the idea that ‘Any sorts of military researches must not be conducted’ is too one-sided a view.”

He also said, “It is self-evident that the ravages of war are brought forth by military affairs, but it is obvious that the military affairs have come to hold a great presence also in creating peace and maintaining it.”