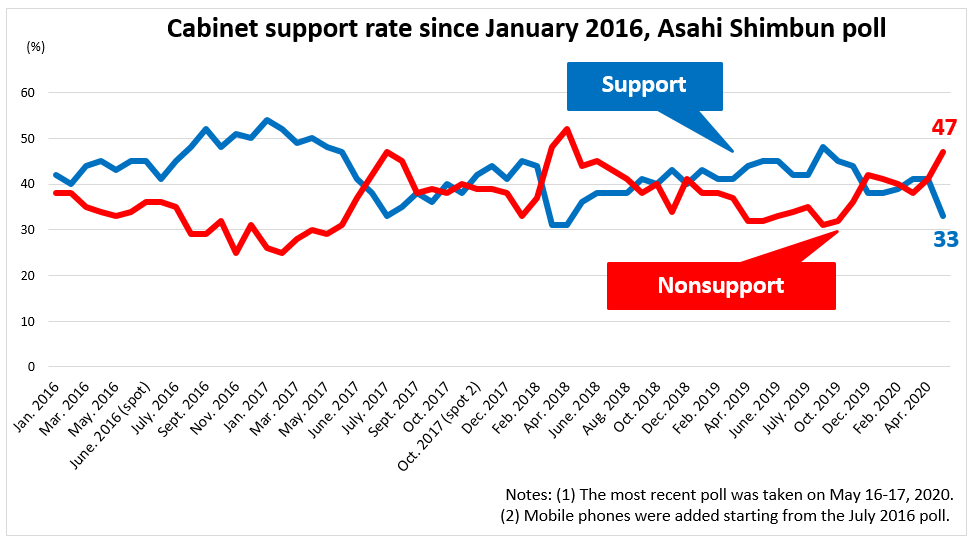 The nationwide telephone-based spot survey conducted by the Asahi Shimbun on May 16–17 probed views on the bill to revise the Public Prosecutor’s Office Act to make it possible for the government to extend the tenure of senior public prosecutors at its own discretion. Only 15% of respondents said that they are in favor of the bill while 64% said they are opposed. Even among cabinet supporters, 48% said they oppose the move, exceeding the 27% who said they are in favor of it.

The support rate for the Abe cabinet was 33%, plummeting from the 41% found in the previous survey in April conducted on April 18–19, while the disapproval rate moved up to 47% from 41%. The lowest approval rating the second Abe cabinet has seen since its launch in 2012 was the 31% found in March and April 2018, when Abe was under fire for the Moritomo and Kake scandals. The 33% found in the recent poll is the second lowest ever for Abe.

The bill to amend the Public Prosecutor’s Office Act is being deliberated in the Lower House, and the government aims to have it passed during the current session. Asked if the passage of the bill should be rushed, 5% said yes while 80% said no. Even among those in favor of the bill, those who think the matter should not be rushed outnumber those who think the matter should be hurried 68% to 18%.

Prime Minister Shinzo Abe has said during Diet interpellations that there is no way that there could be “political intervention in the appointment of public prosecutors,” which is the concern people have with the bill. Some 16% of respondents said that they find the statement trustworthy while 68% said they do not think it is trustworthy.

Asked if the prime minister has demonstrated leadership in combating the new coronavirus, 30% said yes (previous poll: 33%) while 57% disagreed (57%).