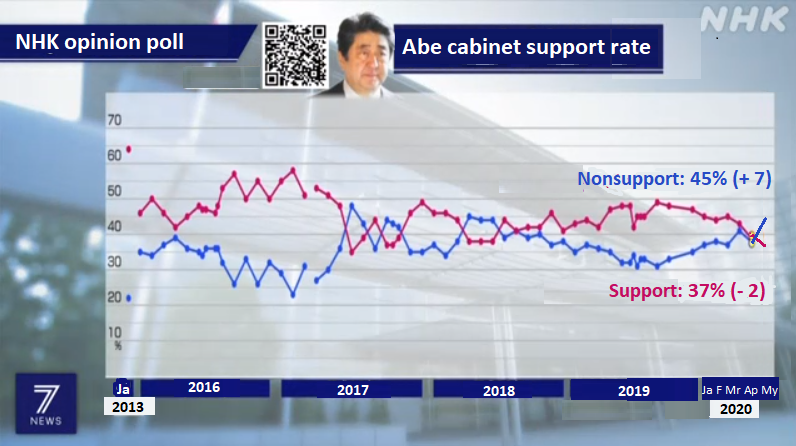 According to the NHK public opinion survey for May, 37% of pollees support the Abe cabinet, down 2 percentage points from the poll conducted last month. Those saying they do not support the cabinet rose by 7 points to 45%. This is the first time the nonsupport rate has exceeded the support rate since the June 2018 poll.

NHK conducted a nationwide survey over the three-day period of May 15–17, 2020, on a computer-aided random digit dialing (RDD) basis and targeted men and women aged 18 or over with calls placed to landline and mobile phone numbers. Valid responses were received from 1,263 of the 2,075 people polled. The valid response rate was 61%.

Some 22% said that they think it will be possible to remove the state of emergency for all prefectures by the end of May, which is the current target date. Meanwhile, 69% thought it would not be possible.

The government abandoned its plan to disburse 300,000 yen in cash to each household where the monthly income of the head of the household had dropped below a certain level, and instead decided to distribute 100,000 yen cash handouts to each citizen. Some 61% of respondents said that they think this is “appropriate,” while 26% said they think it is not.

Asked if they are in favor of or opposed to the bill to revise the Public Prosecutor’s Office Act to make it possible to extend the tenure of public prosecutors beyond retirement age, 17% said they are “in favor” of the bill while 62% said they are “opposed” to it.