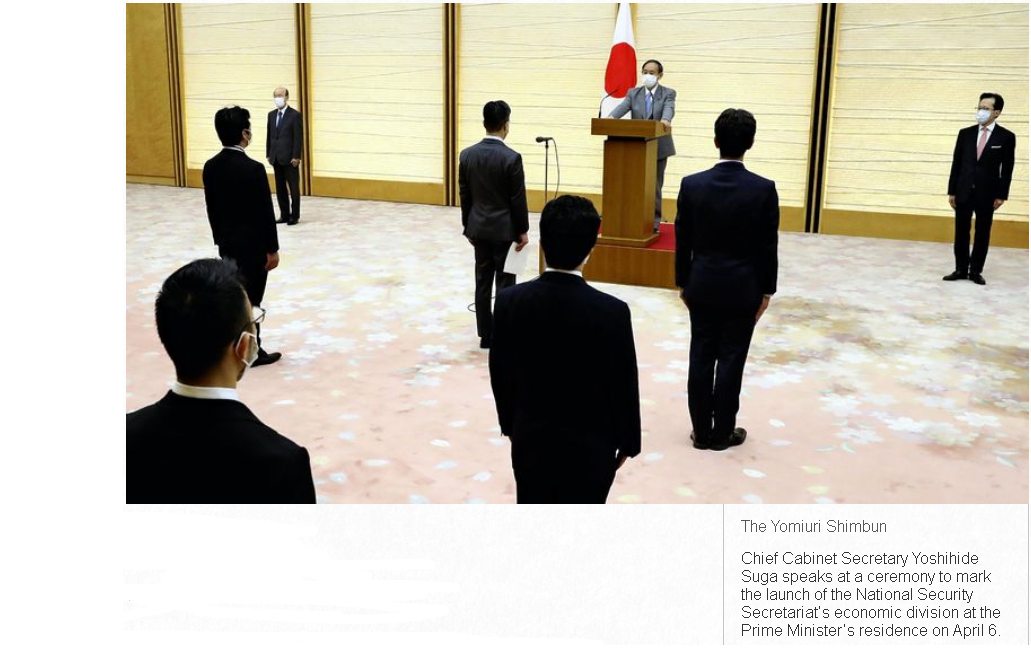 “A large number of issues intersect both the security and economic realms.

This is a turning point in Japan’s national security policy,” Suga said at the launch ceremony.

With a staff of about 20 people, the economic division is the largest of the seven NSS units. Economy, Trade and Industry Ministry official Toshihiko Fujii has been appointed as the division’s top councillor and section chief level posts have been filled with officials from the Internal Affairs and Communications Ministry, Finance Ministry, Foreign Ministry, and National Police Agency.

A senior Cabinet Secretariat official called them “the elite level of the government’s economic affairs offices” and said the goal was for this group to serve as a command post for economic security issues.

Documents the government compiled last autumn outlining the basic concept of the economic division included such descriptions as “maintaining and sharing a security mindset” and “mixing economics and security,” a stance some might say is in stark contrast to the low awareness of economic security that has existed until recently.

Japan’s awareness of economic security remained low in part because after World War II, national security was separated from industrial, scientific and technological policies, with vertically divided ministries and agencies pushing their own policies.

Science and technology were handled by the Education, Culture, Sports, Science and Technology Ministry and the Cabinet Office, industrial development by the economy ministry, and telecommunications by the communications ministry. National security was the purview of both the Foreign Ministry and Defense Ministry, though the two often worked in parallel.

With the aim of breaking down the vertical divides between ministries and agencies, the economic division is modeled after units such as the U.S. National Security Council (NSC), which is said to have a staff of at least 30 people with expertise in cybersecurity, science, technology, international economics and other areas.

“We’ve been waiting for this. Finally, we have someone to talk to in Japan,” a senior NSC official reportedly said to Fujii during a visit to Washington late last year, after an office to lay the groundwork for the economic division was established.

“We’ve been hearing different things from the foreign and economy ministries. We didn’t know who was in charge of economic security,’’ another U.S. official reportedly said. Similar things were reportedly heard coming from the White House and U.S. think tanks.

Some government officials hope that having a unified office for economic security will “expand the scope of Japan-U.S. cooperation.”

The Japanese and U.S. governments are planning to strengthen collaboration on supervising sensitive technology that could be used for military purposes, such as artificial intelligence and biotechnology.

Yang Jiechi, a member of the Politburo of the Communist Party of China, reportedly expressed concern about the establishment of the economic division when he spoke to a high-ranking Japanese government official during a visit to Japan in late February.

“Do you have any particular country in mind?” he reportedly asked.

Such a remark may reflect Beijing’s caution about the establishment of a division it views as an organization through which Tokyo can keep in step with Washington, which is trying to shut out China’s telecom equipment giant Huawei Technologies Co.

Amid the intensifying confrontation between the United States and China, Prime Minister Shinzo Abe has been working hard to build relations with both countries, making his presence felt in the international community.

While maintaining close ties with U.S. President Donald Trump, Abe in October 2018 made the first official visit to China by a Japanese prime minister in seven years. He also plans to invite Chinese President Xi Jinping to Japan as a state guest after the ongoing epidemic of the new coronavirus is contained.

The economic division is a double-edged sword that strengthens the Japan-U.S. alliance, but also could destroy the bilateral relationship that Japan has built up with China.

“Japan also has to maintain relations with its neighbor China. Therefore Japan should not think only in the context of the United States and China, but also work with friendly nations, such as India and Australia, to develop strategies to deal with the situation in a collective manner,” said Masafumi Kaneko, head of the PHP Research Institute.

Trump has accused China of being a source of the coronavirus outbreak, further escalating the U.S.-China conflict.

Amid this storm, how should Japan act in a way that serves national interests? The economic division is facing a huge challenge at its outset.