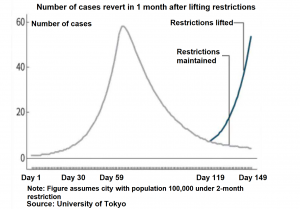 While the state of emergency for the new coronavirus outbreak is lifted in some parts of Japan, there are reports that warn of another outbreak. A University of Tokyo study indicates that if curbs on people’s activities are relaxed, the number of cases will rapidly increase in about one month. A University of Iowa report warns that a “second wave” of infections will occur if limits on movement are not maintained for a period of time. It seems that some restraints on activities will be necessary  to prevent another outbreak while resuming economic activity.

University of Tokyo associate professor Jun Ohashi estimated the increase in infections if requests to stay home are lifted.

Foreign universities have released similar reports. A research team at the University of Iowa submitted a report to Iowa state authorities in April 2020. The report says that it is highly possible that a second wave of infections will occur if restrictions are lifted within four months and people return to normal daily activities.

A research team at Imperial College London estimates that the outbreak may recur from fall to winter 2020 if U.K.’s preventive measures are relaxed in September 2020. Even if school closures and stay-at-home restrictions are successful, a second wave may occur because the population will not have acquired herd immunity.

In countries that have removed lockdown measures, the number of infections have risen again. Germany’s effective reproductive number increased from 0.65 to greater than 1 after the government eased its restrictions, according to the Robert Koch Institute, the German government’s public health institute. An effective reproductive number greater than 1 indicates that the infection is spreading.

A cluster of infections developed in Seoul, South Korea, among people who went to a nightclub after the stay-home restrictions were eased. New cases have been found in Wuhan, Hubei Province, China, after the removal of the city’s lockdown.

It seems that limits on activities need to be maintained in order to prevent another outbreak. The University of Tokyo study says that the number of cases may be reduced even if the state of emergency is lifted, on the condition that probability of infection is reduced by 60 to 70% by such measures as reducing social contact.

The University of Iowa report suggests that second wave may be prevented if there are limits on activities with a high infection rate, such as large gatherings, and protective gear such as face shields are used effectively.