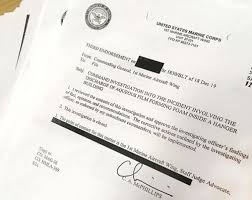 Ryukyu Shimpo wrote that it has learned that the U.S. military wrote in an internal report issued in February that foam extinguisher containing PFAS leaked out of MCAS Futenma in December last year. The paper alleged that the U.S. military did not disclose the details of the incident. The paper alleged that a total of 37,853 liters of contaminated water leaked from a hangar building at the base, some of which was collected within the base. According to the paper, the report said the incident occurred due to human error and a delayed response increased the damage.

The paper wrote that according to the Defense Ministry’s Okinawa bureau, the U.S. military told it immediately after the incident that it had removed almost all of the chemical from the installation and confirmed that there was no leakage out of the base. The paper alleged that the bureau passed this information on to the governments of Okinawa Prefecture and Ginowan City, but the U.S. military wrote in the internal report the paper obtained through a request based on the Freedom of Information Act that the chemical had leaked out of the base. The paper claimed that the U.S. military wrote in the report that although there was no visible evidence, foam extinguisher flowed into a drain and may have reached storm sewers and that the foam was not completely contained and some of it was blown away by wind and rain. The report also allegedly said that the leakage happened after a fire extinguishing system went off in response to heat because a power unit that should not have been activated at the hangar was used there, and that a total of 37,853 liters of water containing 1,136 liters of undiluted foam solution at a dilution rate of 3% leaked.