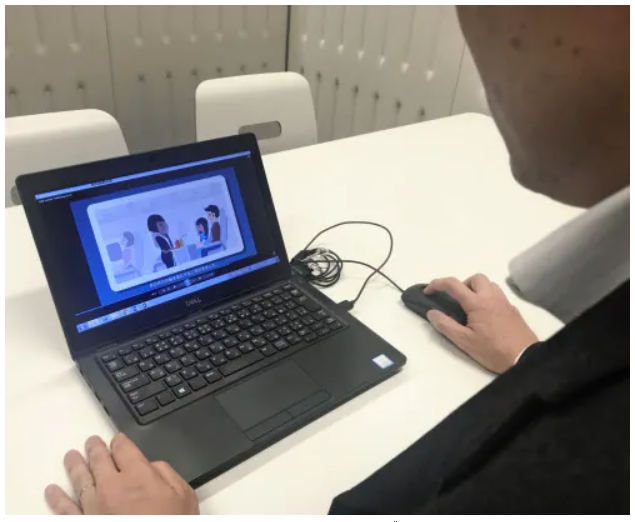 A man takes the e-learning program ANA has been providing to all its employees since fiscal 2018.

The e-learning program that ANA rolled out in fiscal 2018 for all of its employees cites an actual incident involving Alaska Airlines. A girl dressed in tattered clothes got on a plane with an elderly man. When a flight attendant tried to talk to her, the man interrupted. The flight attendant, who became suspicious of the man’s behavior, reported the incident and it turned out the girl was a victim of human trafficking.

ANA decided to provide training on human trafficking to its employees after holding a regular meeting with experts. In 2017, an overseas human-rights expert pointed out: “Human trafficking is a global problem. Airlines should also take the issue seriously.”

In addition to the e-learning program, ANA provided a tutorial to flight attendants on signs that passengers might be involved in human trafficking. The airline urged them to be cautious if they see a man traveling with a child who tries to interrupt a conversation between a flight attendant and the child or who does not know the child’s name.

In fiscal 2019, ANA launched a system to report possible cases identified by flight attendants to the Immigration Bureau via captains and other staff members. The airline has not actually reported any such cases so far, but a representative of the airline says, “We hope we can stop human trafficking by ramping up our countermeasures.”

Japan Airlines has been training its flight attendants on the situation surrounding human trafficking and the steps to take when possible cases arise since December 2019. (Abridged)